For such a little and unassuming ground, Los Arcos has seen its fair share of drama. It has witnessed one club folding, another reach the brink of bankruptcy, a financial demotion and for one magical season in the early nineties, the very real possibility that it could stage top flight football. Goodness knows how it would have coped, because looking at the location it is hard to see how any more space could have been garnered.
Los Arcos has a capacity of 6,000 and is located on a bend in the Rio Segura, which splits the town in half. On either side of the ground are apartments, the local bullring (now derelict) is at the southern end and the aforementioned Rio Segura runs five metres behind the northern perimeter. I’m sure this looked quite spacious back in 1945, when it just had the bullring as a neighbour, and it remained relatively basic for the next 45 years. The first tenants of the municipally owned ground were Orihuela Deportiva, who having been formed in 1944, were the town’s first serious attempt at a professional team.
They didn’t make a bad start either, as within 8 years of forming, the club found itself in La Segunda. Back then, the division was regionalised and Orihuela fought out the 1952-53 season against bigger and more established teams such as Alcoyano CF, Real Murcia, Real Mallorca, Granada CF & Hercules CF. Ultimately, it ended in relegation, although their twelfth position saw them enter the relegation play-offs, but succumb 2-4 to CD Tenerife. For the next 30 or so seasons, Orihuela spent much of their time in the Tercera, save a 3 season spell in the regional league at the start of the 1970’s.
Then in 1984 it won promotion to Segunda 2b, and a fifth place finish followed by eighth spot in 1985-86 would normally be very creditable. Unfortunately, the end of the 85-86 season saw the restructuring of the leagues, so despite the club’s high finish, it found itself relegated back to the Tercera. Three seasons later, they were back in Segunda 2b and what a successful return, winning its first and only title and earning promotion to La Segunda in 1990. Here is a video of the decisive match against Gandia. Following promotion, the municipality developed the west side of Los Arcos, erecting two open stands that sat either side of a new press box, beneath which sat new changing rooms. Incredibly Orihuela finished fifth and within a place and three points of entering the play-offs for promotion to La Primera. It soon materialised however, that the club's success had come at a price, a price it couldn’t afford and instead of looking forward to a second season in La Segunda, the club was relegated to Segunda 2b for failing to pay its debts by the 31 July deadline. It was the beginning of the end for Orihuela Deportiva and after falling to the Tercera in 1993, the club was wound up at the end of the 1993-94 season.
The current occupant of Los Arcos is Orihuela CF, who was founded in 1993 just as Deportiva was entering its final season. An amalgam of two junior teams,  Orihuela Juventud y Deportes &  Atlético Orihuela, the club started its first season playing in orange shirts and white shorts, but switched to the familiar yellow and blue kit when Deportiva folded in 1994. To say that their off-field history has been convoluted is an understatement. Impatient to progress from the regional leagues, the club bought its position in the Tercera in 1998 and won promotion to Segunda 2b in 2002. The then owner, Paco Gomez, also bought FC Cartagena, yet remained chairman at Orihuela. As his interest waned with the team's relegation back to the Tercera, the club was purchased by Jose Rodriguez Murcia. In 2006, the club won promotion back to Segunda 2b and has remained there with top-half finishes in each of the last 4 seasons.
However, the club has experienced financial problems in two of the past three seasons, only clearing its debts at the last minute and thus avoiding relegation to the Tercera. There is a very good summary of the clubs struggles on their Wikipedia page. As for Los Arcos, yellow and blue seats were installed throughout the ground in 2001, then in 2010, problems were found with the structures on the north and east sides of the ground. The stand was demolished leaving just a few steps and with the municipality experiencing financial problems, there are no plans for any redevelopment.
Despite a lack of funds and a crumbling stadium, Orihuela still compete, reaching the play-offs at the end of the 2010-11 season, only to be outplayed by CD Guadalajara. Temporary seating was erected on behind the northern goal, and these remained for the start of the 11-12 season, where once again Orihuela reached the play-offs, but lost to Albacete. During the close season, the club's Alicante-based backers failed to pay the 200.000€ bond on time, and the RFEF expelled the club from Segunda B. The club threatened legal action and a well-publicised hunger strike by the club's directors followed, but to no avail. After six seasons in the third tier, Orihuela dropped to the Tercera for the start 2012-13 season. Then, after a successful appeal to the high court and despite playing its opening two fixtures in the Tercera, Orihuela was reinstated in Segunda B. Only in Spain... 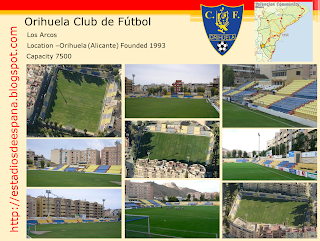