Linares is an old mining town in the far north east of Andalucia, in the province of Jaen. The town struggled in the 1980's & 90's after the closure of the last of the mines and 1990 also saw the end of its most successful senior club, Linares CF. Now to paraphrase Lady Bracknell, to lose one football club is unfortunate... but at the last count, four senior clubs from Linares have folded in the past 80 years, the latest being CD Linares in the summer of 2009. Now that is careless!
To start with, we have to go back to 1909 when Sociedad Gimnastica Linares was formed, a couple of name changes later and Gimnastica Linares finally bit the dust in 1931. Then for a while after the Civil War, Linares Deportivo strutted their stuff, only to fold in 1948, as Atletico Deportivo Linares. Then in 1954 Linares Club de Futbol was formed and became the first club from the town to seriously challenge on the national stage. Linares CF played their first matches at the Campo Municipal, which was on a site next to the current stadium and is now occupied by training pitches. The municipality built the Estadio Linarejos in 1955 and it hosted it's first match on 15 August 1956 when Real Jaen played Valencia in a friendly. Both teams were in La Primera at the time and this would have been a prestigious friendly, despite the local rivalry with Jaen. Linares CF played their last match at the Campo Municipal on 25 October 1956, a 3-1 victory over Almeria.
If the new ground was an improvement, then it was a close run thing as to start with, Linarejos was extremely basic. The dirt pitch was flanked on both sides by just six steps of terracing, with two rows at either end. A grass pitch was installed in 1958 and a second covered tier was added to the west side in 1972. It was around this time that Linares CF stated to make their mark, wining the regional league in 1971 and the Tercera championship in 1972-73. Promotion to La Segunda was the clubs reward and although the stay lasted just the one season and finished bottom, they were not disgraced with 8 wins and 9 draws in 38 matches. Back in the Tercera, and a series of high finishes saw Linares CF earn a place in the newly formed Segunda 2b for the 1977-78 season. Promotion to La Segunda arrived at the end of a successful 1979-80 season, when the club won the Segunda 2b title. Life back in La Segunda was relatively comfortable for the next three seasons with mid-table finishes helped by solid home form. Goal scoring was a problem at this level, only 28 were scored in the 1982-83 season, but a stoic defence ensured survival. That is until the 1983-84 season when, in a very tight division, Linares CF finished seventeenth and a point from survival.
Back in Segunda 2b and Linares CF found it a more difficult division than when they left it four years earlier. They were relegated to the Tercera in 1986 when the division was reorganised, but immediately bounced back with a second Tercera title. The club threw everything at promotion, coming close with a third place in 1988-89. This double or bust approach had consequences however and the players and staff went unpaid during most of the 1989-90 season. Unable to meet its debts, Linares CF disappeared in July 1990, but as always another club sprung up from the rubble.
Club Deportivo Linares started in the lowest reaches of the regional leagues and by 1994 they had reached the Tercera. Over the next five seasons, CD Linares knocked hard at the door of Segunda 2b but failed to win promotion. During this time the club won the Tercera title, but in 1999-00 second place and a storming performance in the play-offs, where they outperformed Villarrobledo, Merida & Racing Portuense,  saw the club reach Segunda 2b. Although their initial stay lasted just the one season, CD Linares were back in the third tier for the 2002-03 season. It took a few years of mid table finishes, but 2005-06 saw the club make a push for La Segunda. Finishing in fourth place in the league, CD Linares beat CD Badalona, but lost 2-3 on aggregate to UD Las Palmas in the Play-offs. A year later and second place in the league saw the club paired with Racing Ferrol in the Play-offs, but lost 3-4 on penalties. CD Linares also finished second in season 2007-08, but Zamora CF accounted for them in the Play-offs. All these attempts to reach La Segunda had come at a cost and with the playing staff dramatically reduced for the 2008-09 season, CD Linares struggled to a fourteenth place finish. With accumulated debts of 4.7 million euros, the club was wound up at the end of July 2009.
If you visit the Estadio de Linarejos today, you can watch the latest incarnation, Linares Deportivo play. They have just won the Jaen Regional Preferente and will play in Group 3 of the Andalucian Primera in 2011-12. Estadio de Linarejos hasn't changed much in the last 40 years. Its main stand is a narrow strip of steps come seats in front of four rows of covered seats. Opposite, on the east side and at the back of the terrace, is a delightful raised stand. About forty metres in length it seats around 300 in six blocks of seats. To protect against the sun, each block of seats is shielded by a retractable awning, making it look like a fruit and veg stall. The north and south terraces are fairly substantial taking the overall capacity to 10,000. Finally,at the back of the south terrace is a raised booth come scoreboard. No Sony  Jumbo Tron's in this neck of the woods and all the better for it. 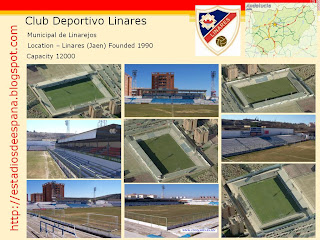