Before we take a look at the current home of Real Jaén Club de Fútbol, let me take you down memory lane or more precisely to the Campo de la Victoria, the club's home from 1944 to 2001. Opened on 29 October 1944 with a match against Algeciras CF, Olimpica Jiennense as they were then known, had just won promotion to the Tercera for the first time. Over the next ten years the team and the stadium's reputation grew and in June 1952, the club won promotion to La Segunda. La Victoria was a particularly compact stadium in the heart of the city, surrounded by tenements, the Colegio El Almadén and Escuela Politécnica Superior, all offering an excellent and free view.
The rise didn't stop in La Segunda, for in their first season in the second tier they won the the league, scoring 85 goals in the process. Then, as is often the case today, the gulf between La Primera and La Segunda proved too great and whilst Jaen did not disgrace themselves, amassing 28 points in finishing fourteenth, relegation followed after finishing bottom of the relegation/promotion play-off group.
Two seasons later and with another Segunda title in the bag, Jaen were back in the big time and this time a fourteenth place finish was enough for them to earn another season at the top. The 1957-58 season, their third in La Primera, was to prove to be their last, finishing bottom of the table with 20 points. Since then, Jaen has spent much of it's time in the third tier, either the Tercera or Segunda 2b. There has been the occasional, fleeting return to La Segunda, in the 1970's and at the turn of the century for example, but regional football is now the club's staple diet.
All sides of the old stadium remained open to the elements until 1981, when an upper seated tier and low cantilevered roof was added to the was added to the south terrace. The press facilities were also moved at this time, from a little box that sat atop of the south terrace to a more substantial structure that stood on stilts above the north terrace. Bench seating was installed on the remaining areas of terracing when Jaen made it back to the second division for  the 1997-98 season.
Over the years, La Victoria staged football in the top four levels of Spanish football. Even towards the end, it was still a tidy stadium that was regularly full. Its 11,500 capacity was tightly packed & fairly evenly spread on all four sides of the ground, with the main stand housing bands of green and white seats under  a low green cantilevered roof. The site was doomed  however and the the municipality started work on a new stadium to the east of town at the start of 1999. The final match at La Victoria was played on 21 June 2001, when Real Betis celebrated promotion back to La Primera with a 0-2 win. You can watch highlights of the final match here. The site was finally cleared in April 2005 and you will now find a branch of that perennial purchaser of old stadiums, El Corte Inglés, on the site. Hmm! 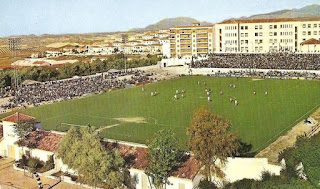 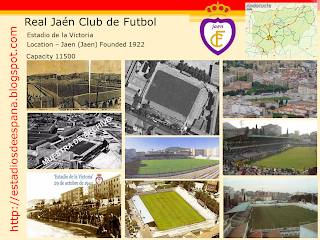