The 1960's were not  great time for Sevilla Fútbol Club.The first team struggled to keep pace in La Primera and were eventually relegated at the end of the 1967-68 season and the reserves, who were formed in 1958, were stuck in the Tercera. Despite all the doom and gloom, Club President José Ramón Cisneros Palacios purchased 125,000 square metres of land to the south east of the city, just over the Rio Guadaira and set about building a sports academy. Opened in 1974 it immediately became the home of Sevilla Atlético who to that point had played their matches at Estadio Sanchez Pizjuan.
The Ciudad Deportiva has since doubled in size and consists of 4 grass pitches and three artificial surfaces. The club gained promotion to La Segunda in 2006-07 overcoming Universidad de Las Palmas and Burgos CF in the play-offs. Promotion saw the main arena developed into an open air 5,100 seat enclosure, using essentially temporary stands on the east and north sides and new seats added to the only existing structure. This is an open wedge with a short cover for whatever glitterati get to watch reserve team matches in Spain.
Sevilla Atlético's last stay in La Segunda lasted for two seasons, a season longer than their initial one year visit back in 1962-63. Back in Segunda 2b, they had a disappointing season in 2009-10 finishing fifteenth. In 2010-11 they finished second and qualified for the play-offs. In the first round Real Union were beaten 4-2 on aggregate, thanks to three goals late in the second tie. In the second round, Guadalajara proved more stern opponents and ended Sevilla Atlético's hopes of a return to La Segunda 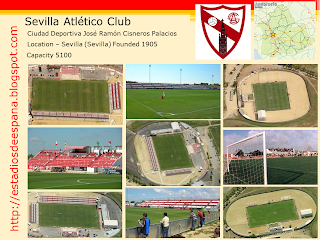