I know of two clubs called Club Deportivo Guadalajara. The first happens to be one of the biggest clubs in Mexico and has 11 league titles to its name, and then there is this one. Formed on 10 January 1947 and tucked away in the sleepy province of Guadalajara in northern Castile-La Mancha, they achieved very little for the first 60 years of its existence, but then things began to stir.
However, let's go back to the beginning. Guadalajara reached the Tercera relatively quickly and challenged for promotion in 1951. Things settled down after that until in 1966, when their position in the league was suspended due to the local Municipality selling Campo el Productor, their home since their formation. The current ground was hastily constructed and Guadalajara returned to the Tercera and relative obscurity in 1967. Finally in June 2007, after spending 46 seasons in the Tercera, Guadalajara defeated Las Palmas B in the play-off finals to win promotion to Segunda B, and it has done very nicely in the four subsequent seasons, culminating in promotion to La Segunda in 2011. The club entered the 2010-11 play-offs in a rich vein of form and beat Orihuela and Sevilla Atletico to reach the final. Here they played CD Mirandés and their goose looked cooked when they lost the home leg 0-1 and fell behind in the away leg. Two goals in the last 15 minutes however, turned the tie on its head and secured a place in the second division for the first time. Not bad for a club that has come from nowhere in little over 6 years.

The Estadio Pedro Escartin needed a bit of a scrub and polish before debuting in the second tier, but who was Pedro Escartin? A former chairman, a famous player or a local politician? No he was a former referee, journalist and two time manager of the Spanish national side. He had no obvious link with , but the Delegación Nacional de Educación Física y Deportes that organised and paid for the stadium, decided upon the name as a tribute to Escartin. It was originally opened on 17 September 1967 and was then known as Campo de Henares after the river that runs close by. beat Real Avila 2-0 in that first match.

Work continued over the next 2 years and the stadium was officially dedicated to Pedro Escartin on 4 January 1970 when played the Selección Española Amateur. Escartin himself refereed the first 5 minutes despite being 68 at the time. April 1974 saw the first match under floodlights, when Cadiz were beaten 2-1 in a friendly and at the start of the 1974-75 season the ground had it first grass pitch.
In 1980, European champions and Tottenham played in a pre-season tournament, with returning in 1981 to successfully defend the trophy.  Then as with the club, very little happened to the stadium until 2006 when the Fondo Norte, a cantilevered covered stand behind the north goal with a capacity of 1000 was opened.
The east side did have a bank of green temporary seats installed for the club's first appearance in Segunda B, and these were replaced during the summer of 2011 with a larger open bank of seating, which spells out the club's name in purple and white seats. This took the Estadio Pedro Escartin’s capacity to 8,000. The southern end lay empty for the majority of the stay in La segunda, but during the 2012-13 season a bank of purple seats was erected. However, given Guadalajara's average attendance of little over 3,000, this did seem to be an unnecessary extravagance.

After a flying start to life in La Segunda, things started to look more than a little precarious, but Guadalajara dug deep, thanks in part to some previously undiscovered away form and eventually clung on to their second tier status. Their first foray in La Segunda came to an end however, in controversial circumstances. Despite finishing the 2012-13 season outside of the relegation places, and above much bigger clubs such as Real Murcia & Racing Santander, Guadalajara was demoted due to claims of financial irregularities lodged by the LFP. The club disputed the allegations and series of appeals fell on deaf ears, and so they returned to Segunda B. With the average attendance almost certain to drop, any plans for developing the stadium further will be put on hold. This may not be a bad thing, for as all good referees know, understated and unnoticed is the name of the game. 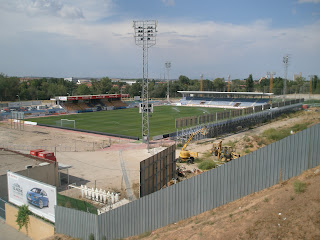 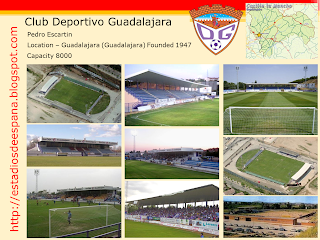