You can't avoid it. Everywhere you go in Almansa it's there, staring down at you, dominating practically every view. Even when Unión Deportiva Almansa was founded, it was included in the club's title. I'm referring to the Castillo de Almansa, the historic 14th century fortress built on El Cerro del Águila, an outcrop of rock in the centre of town.

Formed as Escuela de Fútbol Castillo de Almansa in 1992, the team made quick progress through the lower regional leagues, arriving in the Tercera for the 1997-98 season. Almansa made steady if unspectacular progress until 2004-05 when it won the Tercera Group 18 title. In the play-offs the club overcame Alhaurino and Cerro de Reyes to win promotion to Segunda 2b. It was to prove to be a step too far, but Almansa was certainly not disgraced and their seventeenth position was just 3 points from safety. Back in the Tercera, the club has qualified for the play-offs in four of the past five seasons, but to date, there has been no return to Segunda 2b. The closest to promotion came at the end of the 2010-11 season when Almansa took a 2-1 lead into the away leg of the play-off finals at  CE Manacor. A 1-0 defeat however saw the Mallorcan's promoted. Close, but no cigar. 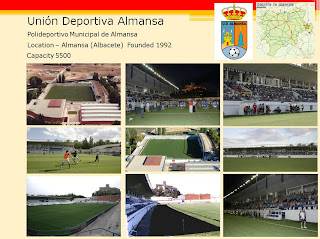