Running a professional football club in the region of Extremadura seems fraught with financial difficulties. CF Extremadura, Merida (Twice!), CD Badajoz, Sporting Villanueva and in January 2011 Cerro de Reyes, have all hit the monetary mire.
Agrupación Deportivo Cerro de Reyes Badajoz Atlético to give them their full title, was founded in 1989 and reached the Tercera a decade later. Despite several impressive finishes in the league, promotion was foiled by defeat in the play-offs. Then, they benefited from their close neighbours financial misfortune... or should it be mismanagement? In July 2006, Cerro's president saved CD Badajoz from folding, by assisting in the latters debts. In return, Cerro de Reyes took their place in the Segunda B with Badajoz falling to the Tercera.
Well, the cost of spending three of the past five seasons in Segunda B finally took its toll and after months without wages, the players went on strike. The Spanish Federation showed them the door in January 2011 after they failed to fulfil two fixtures. There was hope that the club would return to the Tercera for the 2011-12 season, but whilst the club still fields junior teams, no senior outfit re-emerged. Which kind of begs the question - Can a city of 150,000 people support two professional teams? Emphatically no.
It’s difficult to trace the history of the stadium. It looks older than the club so maybe it was built by the municipality. It has a large if somewhat decaying terrace behind one goal and a small basic main stand. 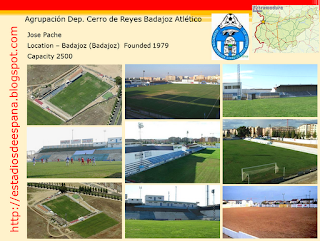