Although the Region of Navarra is not formally part of Euskadi, try telling anybody associated with Club Atlético Osasuna that they are not Basque. Osasuna means "health" in Basque and rather conveniently, so far as their big cousins from Bilbao are concerned, players born in Navarra can play for Athletic.
What about this "Health " club then? Osasuna was formed in November 1920 and for the first two years played their home matches at two venues, Campo del Ensanche & Campo del Hipódromo, both of which as the latter's name suggests, were close to Pamplona's racehorse track. Then on 21 May 1922, Osasuna beat Arenas Getxo 2-0 at a new ground close to the Parque de la Ciudadela. The name of the new enclosure was Campo de San Juan.
The club first rose to prominence with promotion to La Segunda in 1932. This was followed three years later with promotion to La Primera and an appearance in the semi-finals of the Copa del Rey, where they lost over two legs to Sevilla. The second match at San Juan had to be abandoned after 70 minutes, when the home crowd turned hostile with Osasuna losing 1-5 on aggregate. As a result, San Juan was closed for two matches. The first season in the top tier was not a success, with the club finishing twelfth and last place. Their form at home was however impressive, with all seven wins coming at San Juan.
The club returned to La Segunda after the Civil War and despite some valiant attempts to regain their position in La Primera, poor finances took a strangle hold on the club and at the end of the 1943-44 season, the club was relegated to the Tercera. It took five seasons to get back to the second division. The club gradually progressed and in 1952-53 won La Segunda title. Promotion was marred by a fire in May 1953 that destroyed the old wooden Tribuna on the west side of the ground. A new stand was erected and additional terracing added to mark their return to the top flight. Once again the stay lasted just the one season, but this time they finished thirteenth and entered a mini play-off league in a fight to stay up. They lost out however to CD Malaga and Hercules CF.
The club returned to La Primera for the 1956-57 season and completed the final work on the stadium, when a cover was erected over the east side. The stay in La Primera stretched out to four seasons this time, with a high finish of fifth coming in 1957-58. Financial problems were never far away and these were exacerbated with relegation to La Segunda in the early sixties. Campo de San Juan was the clubs main asset and with Pamplona rapidly expanding, the club took the decision to sell the site for 40 million pesetas. The last match was played 7 May 1967 when Elche CF were beaten 2-0.
At it's peak in the early sixties, the Campo de San Juan was a a mix of stands, arranged tightly around the pitch. The southern terrace, with its very shallow cover held over 7,000 spectators and had an ornate exterior, which featured the club's crest and 20 flag poles. The west stand had an upper seated tier and this extended around the corner for a few metres and joined up with the rather ramshackle north stand, which was the oldest structure at San Juan. The east stand was the newest build and featured a single seated tier under a propped cantilevered roof.
The club moved to their new El Sadar stadium in the south East of Pamplona on 2 September 1967. The club's reserve side, Club Atlético Osasuna Promesas, continued to use San Juan, but it was a sorry sight by the time they left in 1982 for the club's new Ciudad Deportiva at Tajonar. The site of Campo de San Juan was developed into housing and its location can be found on the modern day Calle del Monasterio de Urdax. 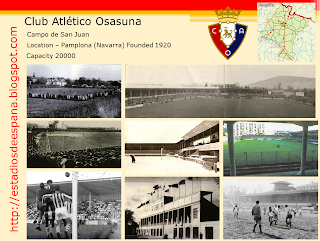 Labels: Gone but not Forgotten, Navarra