You may have learned from the earlier post that the directors at CA Osasuna decided in May 1965 that the Campo de San Juan had more potential as a piece of real estate than a redeveloped, modern stadium. So the site was sold for 40 million pesetas and a new plot of land was purchased for 10 million pesetas a couple of kilometres to the south of Pamplona. Tomás Arrarás was charged with designing the two tiered fully enclosed stadium and worked commenced in October 1966 on the 51 million peseta project. The new stadium was named El Sadar after the Rio Sadar that runs to the west of the site. It had an initial capacity of 25,000 of which 7,000 was seated. The stadium opened on 2 September 1967, but unusually Osasuna did not take part in the first match. That honour fell to Real Zaragoza and Vitoria Setubal, who were invited to compete in a triangular tournament with the hosts.

Whilst the move was considered necessary for the long term future of the club, the construction had left the club with little if anything to spend elsewhere and this was reflected in the team’s performance. At the end of the 1967-68 season, Osasuna finished a lowly fifteenth in La Segunda and dropped to the Tercera for the first time in twenty years. The following decade saw a continuous journey back and forth between the second and third divisions before finally, Osasuna left the Tercera behind in 1977. After two seasons of mid-table finishes, the club put together an impressive run of form that saw El Sadar become a fortress.  Osasuna won 17 of their 19 matches at home and eventually secured third place and a return to La Primera. Incredibly, despite one of the smallest budgets in La Primera, Osasuna defied the odds throughout the 1980's and whilst there were a few close run-ins with relegation, more often than not, the club achieved a mid-table finish. This stability in the top division prompted the next phase of the stadiums development.

In 1989 a new Tribuna was added to the west side of the ground at a cost of 561 million pesetas. This was however privately funded and Osasuna having cleared their liabilities, remained debt-free. The new stand was an impressive addition, with a deep cantilevered roof that hovered over the lower tier  and a sweep of red seats, raked at an alarming angle. As a result the capacity of the stadium increased to 30,000, with 12,000 seats. This time, Osasuna thrived on the improved surroundings and finished fourth in the league earning a place in the UEFA Cup. In the early 1990's, new legislation laid down by the Spanish Federation stipulated that all clubs in the top two divisions needed to become a public limited companies, unless that is, they were a fans co-operative. Real Madrid, Barcelona, Athletic Bilbao and Osasuna were and still are owned by their fans and therefore escaped the change. Whilst their status off the field remained unaltered, Osasuna saw the break up of their best ever team and dropped to La Segunda in 1994. The club did not challenge for the promotion spots as expected and very nearly dropped into Segunda B at the end of the 96-97 season. Two seasons of mediocrity followed before promotion was sealed with the runners-up berth in 1999-00.
Osasuna has remained in La Primera ever since, mostly avoiding relegation by the skin of their teeth, but they also managed to emulate that great team of 90-91 with a fourth place finish in 2005-06. A season earlier and Osasuna reached their first final of the Copa del Rey, where they lost 1-2 after extra time to Real Betis. During this period, the stadium has remained principally the same. It was converted to an all-seat arena in the late 1990's reducing the capacity to 20,000 and the pitch was lowered by two metres in 2003, allowing  room for a few more seats, but also improving the site lines. In December 2005 the Navarrese parliament approved the payment of 4.2 million euros to the club which resulted in El Sadar becoming the Estadio Reyno de Navarra, or Kingdom of Navarra Stadium, to tie in with the Region's tourism slogan. Given the club's top flight standing and tidy stadium, it may surprise some that La Selección have never paid a visit. Well it should be remembered that Navarra is considered to be part of the wider Basque community and put simply, the Spanish National side is not welcome around these parts. The stadium has witnessed "International" football as the La Selección de  Navarra played three matches here during the mid 2000's.
The stadium remains a fortress and in recent seasons it has been Osasuna's most potent weapon, with the top teams particularly Real Madrid, finding points hard to come by. Changes in the past decade have seen club offices, supporters club, retail outlets and restaurants all open within the complex, making it the hub of all club activity. It is without doubt, a well run provincial club with total fan input and in a football world that is becoming increasingly more corporate, this fact alone makes Osasuna the envy of many other clubs, big and small. 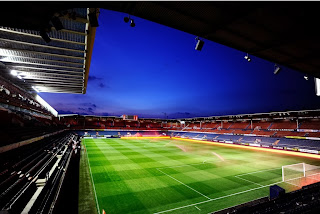 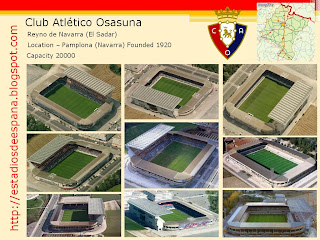 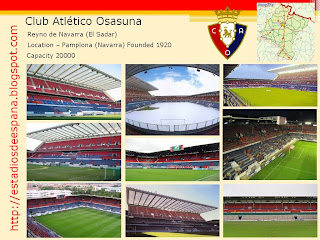