Navalcarnero is a small town some 30 kilometres to the south west of Madrid. Nothing remarkable in that, but for the stadium aficionado (AKA geek), it has something rather special tucked away in its southern suburbs. But before we get too excited, too soon, let me me tell you about the town's resident club, the rather grandiosely monikered Club Deportivo Artístico Navalcarnero.
Founded in 1961, CDA Navalcarnero hung around the regional leagues of Madrid until arriving in the Tercera in 1987. Six seasons of mediocre finishes followed before the club dropped back spent to the regional preferente in 1993. However, when the club returned to the Tercera in the late 1990's they began to make their mark. They qualified for the play-offs for promotion to Segunda B for the first time at the end of the 2001-02 season, but failed to progress. A season later, the play-offs were their downfall again, but after finishing the 2003-04 season in fourth position, they beat CCD Cerceda and CF Norma to gain their place in Segunda B.

Their first season in the third tier was a bit of an eye opener, with the team well off the pace throughout the season. Ultimately, 7 wins in 38 matches was not good enough and they were relegated in last but one place, with only Atletico Arteixo saving them from the indignity of finishing bottom. Back in the Tercera, but with a new stadium, Navalcarnero consolidated for a couple of seasons before mounting another push for promotion. A second place finish saw the club enter the 2007-08 play-offs and beat Granada Atlético CF and Atlético Granadilla to regain a place in Segunda B. The club put together a much stronger challenge for their second visit to Segunda B, but ultimately fell short with a total of 37 points and seventeenth place. Back the in Tercera, the club struggled and returned to the regional preferente for the first time in 16 years at the end of the 2011-12 season.
I have to say that the Estadio Municipal Mariano González is one of the quirkiest small stadiums in Spain. It was built on the site of the former home of the club that featured a basic cover on the west side and club house at the southern end. The north and east sides cut into the side of a hill and featured narrow terraces. Reopened in 2005 with a match against Atlético Madrid, the stadium is bedecked in burgundy and yellow seats, the colours of the town. The stadium has kept the basic alignment but moved the pitch, now synthetic, a few metres to the south and the north end now features a bank of five rows of seats, cut into the side of the hill.
But it's the main stand that really sets this ground apart. It's a two-tiered structure, with a bank of seats that run from each penalty area. The second tier is only 30 metres in length and is covered by a burgundy cantilevered roof. To the right of the second tier is a tower which features the stadium control centre and a clock and to cap it all, a 4 metre spire (In burgundy of course!). The municipality really does deserve congratulations, as it would have been so simple to build a faceless stadium that ticked all the boxes. Instead they have built a stylish and distinctive stadium that sets Navalcarnero apart from so many other new builds in Spain. 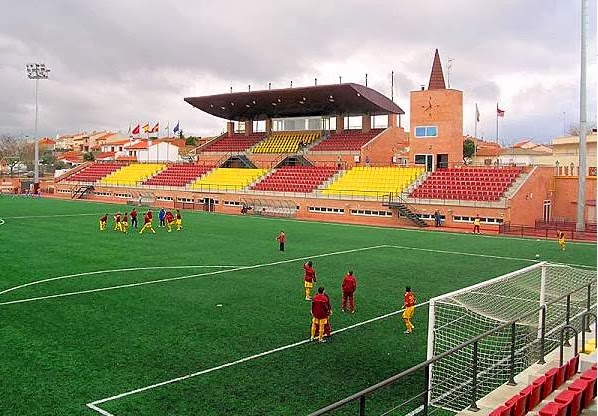 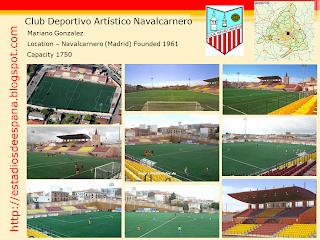