Deep in the Galician countryside, 20 miles south of La Coruna, is the village of Cerceda. Around 5,000 people live in this rural idyll where the peace and quiet of this rustic setting is only broken from the noises emanating from Municipal Estadio O Roxo. Oh, yes... that and the huge Sogama Power Plant, which converts waste to energy, oh, and the local quarry. Yeah, they also create up a bit of noise.
Hey, let’s not get snooty about this, as there is money in muck and the local economy has benefited massively, with some of the cash being invested in O Roxo, a sports village that would grace a town 10 times the size of Cerceda. Centro Cultural e Deportivo Cerceda is the local team that plays here and having been formed in 1968, they didn’t do a great deal in its first 25 years of existence. Then, in 1994, they reached the Tercera, and since their arrival, have won the league four times and qualified for the play-offs on 11 occasions. Unfortunately, knock-out football doesn't seem to be their forte, as promotion to Segunda B has proved elusive.
O Roxo consists of 3 pitches, two of which are all weather, and an indoor sports hall. The campo de futbol features a modest stand of four rows of seats that is 70 meters long. All around is hard standing with plenty of space for development, but let’s not get ahead of ourselves, CCD Cerceda has been here eleven times before. 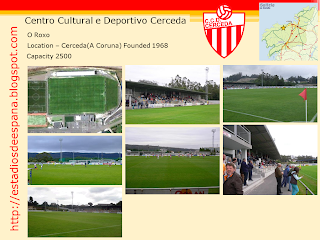