FC Santboia celebrated its centenary in 2008 by reaching the play-offs for promotion to Segunda 2b. In the previous 99 years, the club had participated in the Tercera play-offs on just the one occasion in 1995-96, finishing bottom of the group behind  CF Llíria, Cartagena FC and UD Poblense. Their 2008 showing was considerably better, eliminating Gimnastica Torrelavega in the first round, before falling to Valencia Mestalla in the final. A fourth place finish in 2008-09 saw Santboia return to the play-offs but lose in the first round to SD Tenisca. Undeterred, the club reached the play-offs for a third consecutive season in 2009-10 and eliminated Arandina CF and CD Corralejo before facing CD Tudelano in the final over two legs. A 2-1 home win in the first leg at their Joan Baptista Milà stadium was cancelled out by a 2-1 defeat in Tudela. The teams could not be separated after extra time, but Santboia prevailed 4-3 on penalties to reach Segunda B for the first time.
Their first season in Segunda B proved to be a difficult affair and they eventually finished bottom of the table with just seven wins from 38 games. The Estadi Municipal Joan Baptista Milà was originally built in 1975 and was inaugurated on 8 December of that year with a friendly against RCD Espanyol. It was extensively renovated in 2003 and given its current title. It has an official capacity of 1,500, 1,000 of which are seated in the main stand on multi-coloured seats. With plenty of hard standing and banking around the other three sides, there is plenty of scope to increase the capacity with temporary stands. 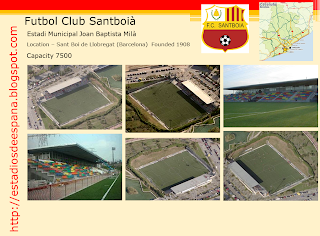