There is a pleasing symmetry to Recreativo Huelva’s move to the Estadio Nuevo Colombino. For their new stadium occupies the site of the former Gas Company’s playing fields, where in 1889 Recre played its first game of football. This spot, on the banks of the Rio Odiel, lost its playing fields decades ago and for a while became a dock for local trawlers, landing their catch on the less than romantically named Barriada de Pescadería or Fish Slum. By the late 1990’s the municipality had drawn up plans for this waterside area, which included a modern 21,000 seat stadium.

The stadium was designed by local architect Joaquín Aramburu and work commenced in March 2000. Aramburu put a modern slant on the design of traditional medium to large sized stadiums found in the south of Spain. The classic design often featured two tiers of seating, square to the pitch and a covered stand on the west side. In essence, that is the Nuevo Colombino, but the stadium also came with all mod-cons, such as 32 private boxes, press rooms and a gargantuan gymnasium.  As this is Spain, the build would not be complete without a tight deadline and the builders sailed close to the wind with final preparations for the opening. As found with the new builds in Murcia and Oviedo, the delays meant that the pitch had not properly settled by the time of the opening match. Recre stepped out into their new arena on 6 November 2001, to play a friendly against Newcastle United, a nice nod to their English ancestry. The pleasantries ended there however, as Recre ran out 3-0 winners. Eight days later, the Spanish National side played their first ever match in Huelva, beating Mexico by a goal to nil.
To use a Norwegian commentary parlance, the pitch had taken a hell of a beating and sections had to be re-laid. This meant that Recre travelled back into town and played a few more fixtures at the original Estadio Colombino, before finally playing their first competitive match at the new stadium on 6 January 2002. The previous 2000-01 season had seen the club have its most successful campaign in over 20 years and they carried that good form into the 01-02 season. Throughout the season, Recre proved difficult to beat, drawing 15 of their fixtures and as other teams fell away, particularly Xerez, Recre made a final push and secured third place and promotion with one match to go. The 2002-03 season would be the club’s first in La Primera for 24 years and only their second overall visit. Alas, the fairy-tale could not continue and Recre’s stay with the elite lasted just one season, finish 18th after a miserable end to the season saw them fail to win any of their final seven matches. The Copa del Rey however, provided some light relief and after accounting for Betis, Atletico and Osasuna, Recre reached the final for the first time. The match was played in Elche and Real Mallorca won the trophy thanks to a 3-0 win. After a period of consolidation, Recre returned to La Primera in 2006-07 and achieved a best ever finish of eighth. Two further seasons in the top flight followed, before a return to La Segunda and mid-table mediocrity in 2009.
The stadium stands on the flood plain of the Rio Odiel, but is raised some fifteen feet above the banks of the river. The plans to redevelop the rest of the area remain on the drawing board, but as you walk across the dusty wasteland towards the stadium, you can't fail to be impressed by the modern lines of the Nuevo Colombino. Particularly striking is the roof of the main stand which dominates the flat landscape. It hovers over the upper deck of the west stand like the top of a giant laptop, waiting to be flicked open. When you look at other stadiums that were built around this time, you have to say that the municipality of Huelva has got a lot of stadium for 14 millions euros. The top tier of the west stand has a capacity of just over 2100, beneath which and sandwich between the upper ring of white seats, are the 32 private boxes. The ring of white seats is interrupted in each corner, where the seating makes way for giant, curved advertising hoardings.
Unusually, the floodlights are situated inside the ground, between the corner hoardings and the lower tier of blue seating. If you were ever in any doubt of your location and the date of Recre's formation, its name and the year it was founded is helpfully spelt out on the open sides of the ground. The town is rightly proud of this modern stadium and La Selección like it as well, returning in May 2008 to play Peru in a friendly. The stadium also featured in the 2007 Spanish feature film Salir pitando. The story centres on a corrupt referee and used footage of Recre's 2-0 home victory over Valencia in the 2006-07 season. The film bombed, but the Estadio Colombino look stunning in its supporting role.
Recre attract crowds of around 7,000, but plans are in place to extend the capacity of the stadium to 26,670. This will be achieved by seating the upper corner sections, which in turn will require the relocation of the floodlights. The east side will also be redeveloped, with an identical grandstand being erected opposite the current structure. The new improvements have been designed by the stadium's original architect, Joaquín Aramburu. Whether this is entirely necessary is open to debate and is clearly a question that is vexing the municipality, as they have shelved plans to start the expansion. Either way, Huelva has shown that the El abuelo del fútbol español or the Grandfather of Spanish Football still has a few tricks up its sleeve and can positively thrive in a modern arena. 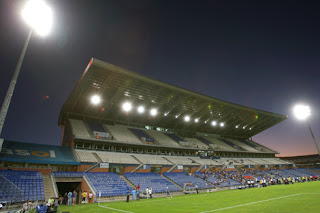 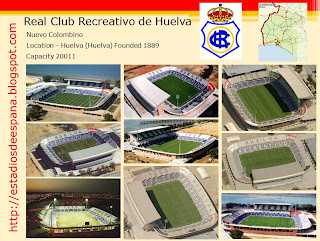 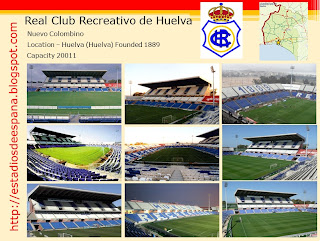