With its precipitous stands and implausibly deep roof, Valencia's Mestalla is a truly wonderful stadium . It is an arena that oozes class and atmosphere and when full, it can scare the bejesus out of the opposition and their travelling support. Alright, it dates from an era when supporter comfort meant that you were lucky if you weren't standing in an inch of urine when you visited the gents, but back then it was simple... going to a football match was just that, you watched the match.
Several attempts were made in the early days of the twentieth century to form a senior club in Valencia, and whilst some trace the origins of the club back to 1902, the official date of formation for Valencia Club de Fútbol is 18 March 1919. The Mestalla is not the club's only home as for the first three and a half years Valencia played at a tight ground close to the Rio Turia. The Campo de Algirós saw Valencia's first match on on 7 December 1919 against Castellon Castalia, which ended goalless. The ground occupied a wedge of land next to the Cavalry Barracks, the Civil Guard headquarters and the Estacion de Aragon. It was was rented from Señor Eugenio Miguelo for 100 pesetas per month  and was also used by other Valencian clubs. Algirós was surrounded by a wall, meaning it was ideally suited to charge admission and had rudimentary bleachers, but the pitch was very narrow, being only 47 metres wide and as Valencia's following grew (by 1923 they had 2,500 members), the 5,000 capacity ground proved inadequate, so the club sought new premises.

In 1923, Valencia purchased a plot of land 150 metres to the north of Algirós, close to the Mestalla drain, for the sum of 316,000 pesetas. Club President and architect Francisco Almenar Quinzá designed the stadium which was built by club member and builder Ramón Ferrer Aguilar. The first phase consisted of an uncovered terrace of 10 rows around two sides of the pitch, which was larger than Algirós at 100m x 59m. The new stadium, with a capacity of 17,000 opened on 20 May 1923 with a match against Levante and staged its first international match 14 June 1925 when Spain beat Italy 1-0. 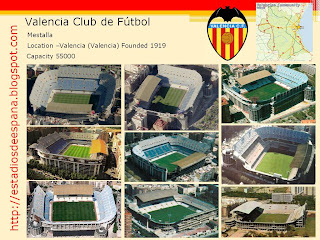 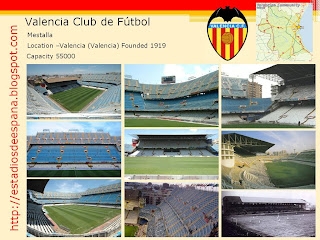