One look around the old Campo de Futbol de Las Gaunas and you could practically chart the progress of the then resident club, CD Logroñés. Such was the haphazard development of the ground, that a total of 6 covers and two open terraces made up the stadium, each added at different phases in the club's rise through the leagues. I first clapped eyes on Las Gaunas in the early 1990's. These were pre-internet and Sky TV days, so if you wanted to watch Spanish football from the comfort of your own home, you needed to improvise. Thanks to a bit of aerial wiggling and re-tuning I could pick up S4C's coverage of La Liga on Sgorio, a highlights package that aired at some unearthly hour on a Monday. Needless to say, Las Gaunas caught my bleary eyes.
Las Gaunas was no ordinary football ground. At a time when stadium uniformity was gaining momentum, here was a football ground that seemed to have been made up as they went along, a sort of Spanish equivalent to Oxford United's Manor Ground. But, let's take you back in time, to 1924 in fact, when the original Club Deportivo Logroño left their basic Campo de  La Trilladora or Las Chiribitas in the east of the city, for a more suitable field to the south. The field was owned by the Gaona sisters, but this was soon distorted to Las Gaunas and it staged its first match on 15 June 1924 when French side, Vie aun Grand Air du Medoc was defeated 3-0. Due to the fact that there was no football federation in La Rioja, CD  Logroño joined the Guipuzcoan league in the late 1920's and even reached the semi-finals of the Copa del Rey in 1931. The club was struggling financially (a recurrent theme for football in Logroño) and even though it was invited to take part in an expanded second division Championship in 1934, it folded after completing just three of its 16 fixtures. 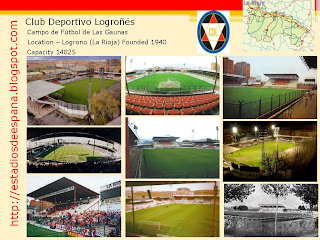