With the crumbling Estadi Lluis Sitjar having its fate sealed by FIFA’s all-seater ruling, Real Mallorca needed to find alternative accommodation. Fortunately they found an ally in the shape of the local municipality. Palma had been awarded the 1999 Summer Universiade (or the World Student Games in old speak) and  a plot of land was chosen at Can Valero, around 2 miles north west of the town centre, to build a new multi-sports stadium. As building got under way, Real Mallorca signed a 50 year lease with the municipality on 15 December 1997 that granted the club exclusive use of the stadium for all footballing activity.

The cost of the project was around 35 million euros and the head architect was soon to be club president Guillem Reynés. The stadium was inaugurated on 3 July 1999 when the Student Games were officially opened, and seven weeks later, Mallorca got its first taste of football at the stadium when Real Madrid kicked of the new season and spoiled the party with a late winner. However, things soon started to look up on the field, as club repeated its success of its final season at Lluis Sitjar with another third place finish in 2000-01. In the following season's Champions League, Mallorca unlucky not to progress to the knock-out despite accruing 9 points. A second national title arrived in 2003 when the club beat Recreativo Huelva 3-0 in Elche to secure its first Copa del Rey. After the cup success, results tailed off and Mallorca spent several seasons avoiding relegation. Form picked up towards the end of the decade and the club achieved a well-deserved fifth place in 09-10. However, club finances were a mess and in May 2010 the club filed for bankruptcy and entered administration with debts of 45 million euros. As a result, the club was not granted a licence to compete in the 2010-11 Europa League.
What shall we call the stadium? I’ve started out with Son Moix, but in 2004 the club and municipality signed over naming-rights to a telecommunications company and the stadium was known as the ONO Estadi until 2010. That’s when a further deal was struck with hotel chain Iberostar. I think I’ll stick with Son Moix. What of the stadium? Well, you know I going to whine about the fact that it has an athletics track, so that aside, what about the rest? Well, it is better than some, for example the Estadio Gran Canaria, but it frankly it doesn't get the pulse racing. The stadium’s one redeeming feature is the beautifully curved cantilevered cover that hangs elegantly over the two tiers of the west stand. Temporary seating was erected in front of the main stand during the 2012-13 season, and whilst this brought the fans a little closer to the pitch, like the rest of the stadium, it was rarely filled. The double tier effect is repeated on the east side, whilst both ends are made up of single tiers and have all the sight disadvantages one associates with stadiums of this ilk. 23,142 bright red seats fill the stadium and whilst I shouldn't concern myself with such trivial matters, how do they remain bright when all others of this age fade? As one would expect from a build little more than ten years old, the media have excellent facilities, as do the corporate guests. The stadium also houses a club-themed café, club shop and headquarters of Fundació Reial Mallorca, a fans forum founded in 2002.
With a modern, top flight stadium now in place, the islanders could expect a visit from the national team. And that's just what La Roja did in February 2003, when Germany were beaten 3-1 in a friendly. Son Moix played host to the national side again in March 2007 when Iceland was defeated 1-0 in a Euro qualifier. Six years on and the stadium was chosen again, this time to host Spain's World cup qualifier  with Belarus.
From the upper tier of the east and west stands, you can see the mouldering anfiteatro of the old Lluis Sitjar stadium, little more than a kilometre away. It is a potent reminder of the days when watching Mallorca was an interactive experience. Little chance of that happening at Son Moix, for with attendances averaging 13,000, any atmosphere generated quickly disappears into the Mallorcan air. So despite a particularly fragile financial position and relegation to La Segunda, Mallorca is still giving serious consideration to a project that would see the redevelopment of Lluis Sitjar site. The initial plans for a 40,000 covered arena at a cost of 220 million euros may have to be scaled back, but there is a determination to get back home for the club’s centenary in 2016. Unlikely, but after all home is where the heart is, and Real Mallorca’s can be found beating within the walls of the Estadi Lluis Sitjar. 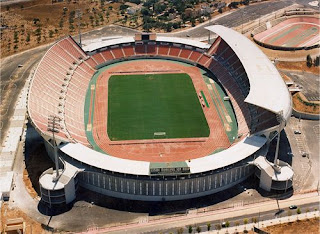 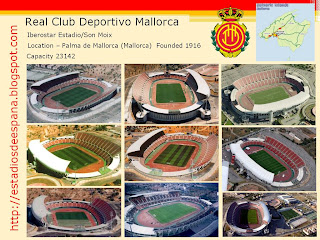 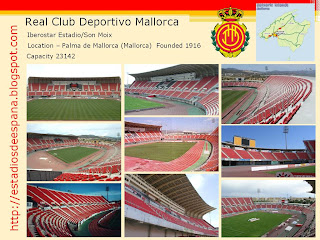