It does seem to the casual observer that when a lower league club in Spain hits the financial rocks its days are numbered. There are few stays of execution or none of the prevarication that seems to accompany clubs that befall a similar fate in England. No, in Spain It's pay your players or you're toast. This was the fate of Club Deportivo San Fernando, a club formed in 1943, and for a period in the 1950's & 60's, it was relatively successful. However, attempts to regain those halcyon days left the club with a debt of 2 million euros and in June 2009, the death knell was rung.
Football had been played in San Fernando since the turn of the century, but little impact was made by any of the town's senior clubs in those early years. In 1941, the town's three senior clubs, San Fernando FC, Atlético San Fernando and CD Arsenal were persuaded  to merge by a Cantabrian emigrant Serafín Gómez Solares. The fledgling club played under the fantastic name of CD Once Diablos, or first devils, but had a change of heart in 1943 and registered with the Spanish federation under the name of CD San Fernando. The club reached the Tercera in 1946 and in June 1954 beat Real Murcia in a play-off the earn promotion to La Segunda. San Fernando stayed in the second tier for ten seasons reaching a peak at the end of the 1957-58 season with a sixth place finish. The stay came to an end in 1964 and the club returned to the Tercera were it stayed until 1978-79 when it won promotion, but this time to Segunda B. The club made little impact and after four seasons dropped back into the Tercera.

During this period, the club played it's matches at the Campo de Marques de Valera, a simple ground in the heart of the towm. They left for the Estadio Bahia Sur in November 1992, and whilst it was an improvement on Campo Marques de Valera in terms of comfort, it was a rather soulless municipal ground with no cover and an athletics track around the pitch. To the town's credit, it was supported by one of the best multi-sports facilities in southern Spain. Oh yes... and I did like the floodlights with their triangular light configuration!
CDSF did manage to break out on three further occasions, once in the mid-90's, again for two season spell from 2000-01 and finally in 2008, when play-off victories over CD Calahorra and Amurrio Club earned them promotion to Segunda B. 2008-09 was to prove to be the club's last, with the clubs economic problems effecting moral and performance on the pitch. They club played its last match at Bahia Sur on 10 May 2009, losing 3-5 to UD Puertollano. CDSF finished seventeenth and were relegated, but in the close season the magnitude of the clubs debts became apparent and the club was dissolved at the end of June.
The ashes of the old club were still warm when San Fernando CD was formed on 8 July 2009. The new club played its first match on 2 August against Sevilla Atletico, winning 2-0 at Bahia Sur. They entered the Primera Andalucia and won promotion at the first attempt. Matches were played at Campo La Bazan as Bahia Sur was undergoing a substantial remodelling for the 2010 Latin American games.This included a new athletics track, replacing the 12,000 seats and most impressively, a roof over the main tribuna. This is suspended from above and supported at either end of the rows of blue & white seats, hanging over the deck like a giant birds nest.
The club started the 2010-11 season back at Bahia Sur, now renamed Estadio Iberoamericano, and success continued with a second place finish in Tercera Group 10. Convincing performances in the play-offs saw the club reach the final phase and a two leg match against La Roda CF. Unfortunately, San Fernando shot themselves n the foot away in La Roda, with an error strewn performance contributing to all of their opponents three goals. A 0-1 defeat in the home leg consigned the club to the Tercera for at least another season. A year on and that was all forgotten as San Fernando won through three rounds of the end of season play-offs to earn a place in Segunda B. That first season in the third tier saw the club achieve a comfortable finish of 7th. By May 2014 however, boom had turned to gloom, as San Fernando CD was relegated back to the Tercera. 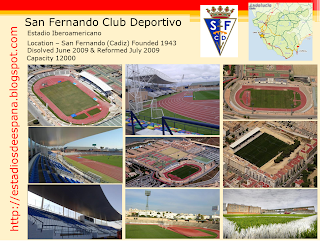