La Roda Club de Fútbol is the latest incarnation to hail from this small town 40 km north west of the regional capital, Albacete. Formed in 1996 as Sporting La Roda, it reached the Tercera in 2001 and has remained there until June 2011.
Thanks to a third place finish in Group XVIII of the Tercera, saw La Roda reach the play-offs for promotion to Segunda B. This was the third occasion and it was case of third time lucky when they beat San Fernando CF 4-0 on aggregate. The damage was done in the first leg in La Roda when they took advantage of an error strewn performance by the Andalucians to win 3-0. La Roda made there debut in Segunda B at the start of the 2011-12 season and had a decent first season, finishing ninth. The club was pushing for promotion for much of the season, but a disappointing final third saw results tail-off. Their second season in Segunda B saw a similar pattern develop, culminating in a tenth placed finish. Relegation back to the Tercera appeared to have followed in May 2014, after a disapointing campaign saw the club finish 17th. However, failure by both CD Puertollano & CP Villarrobledo to pay the required bond to the RFEF, earned La Roda a reprieve.

The Campo Municipal is situated to the south west of the town, across the road from the Plaza de Toros. Rebuilt in 2000, It's fairly simple fare, with one full length stand on the west side of the enclosure, with a raised central section with red and blue seats. This is flanked on either side by terracing, all covered by a propped cantilevered roof. Opposite the main stand is a simple terrace of 3 steps, whilst behind each goal is an area of hard standing, bringing the capacity to 3,000. 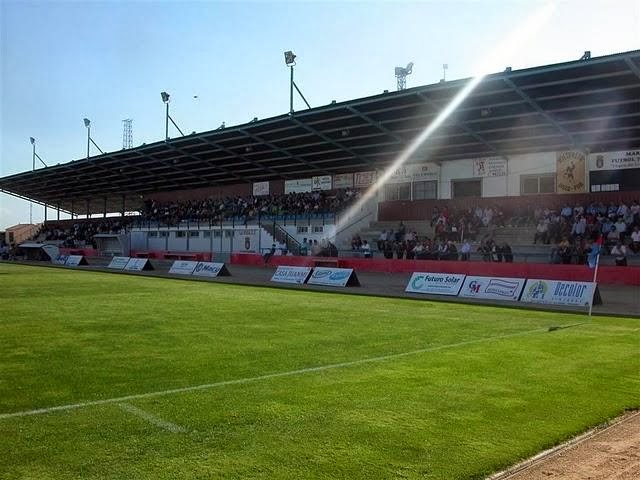 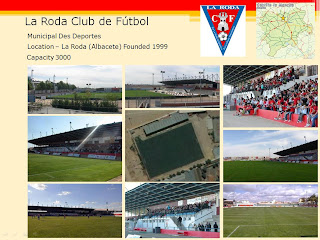