I was a little confused as to where Rayo Cantabria was playing its home matches. It wasn't helped by their official website that made little or no reference to the fact that the club had taken up residence at the new stadium on the edge of San Román de la Llanilla, about 3 miles west of Santander. Not great when you consider that the club had just reached the play-offs and was about to play one of the most important matches in its history. (...and relax!).
Anyway, thanks to some help from members of the Futbolplus forum, I have managed to solve the riddle and can give you a little more information about the club and the new stadium. The club was originally founded in 1926 as Rayo Sport in the Alto de Miranda district of Santander. The club has played most of its football in the Tercera, 45 seasons in fact, and in 1959 came within a match of La Segunda, but SD Eibar beat them 0-5 in the second leg of the play-off. Following the restructuring of the league in the late eighties, Rayo won promotion to Segunda 2b after winning the Cantabrian Tercera title in 1986-87. Unfortunately, their one and only season at this level ended in relegation with a total of just seven wins and nine draws in the 38 game season. The low point coming at home in a 2-7 reverse to Ponferradina. Up until 1993, the club acted a a subsidiary of Racing Santander, but due to changes imposed by the Spanish Federation regarding the naming of reserve sides, the club was reformed as Sociedad Deportiva Rayo Cantabria in 1993 and Racing Santander formed its own reserve team.
Due to limited finances and never owning its own ground, Rayo has led quite a nomadic existence, playing their matches at the old and new El Sardinero, La Albericia, Campos del Regimento, Campo Monte in the district of San Juan and finally, this season they have moved to the new Campo Municipal San Román.
Built at a cost of 1.4 million euros and opened in September 2010, the Campo Municipal San Román features a short stand with a barrel vaulted cantilevered roof, very similar in fact to Amorebieta's Campo Urritxe. The pitch is artificial, but despite this fact the local rugby club use the facility. It has had some teething problems, notably no hot water during the winter months, but this didn't seem to effect Rayo, who finished in second place in the Tercera, losing just one game at home throughout the season.
Rayo won through to the second round of the play-offs after beating Cultural Durango on penalties, but fell to CF Montanesa on penalties after drawing 1-1 on aggregate. Due to the fact there are very few pictures of the new stadium, I'm afraid you will have to make do with just one more foto. 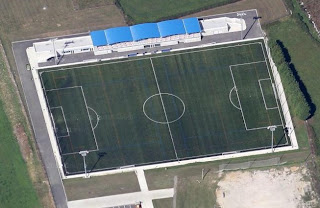