Club Deportivo Lugo has always played second or even third fiddle, when the footballing rations have been dealt out in Galicia. Deportivo La Coruña and Celta Vigo are the region's big-wigs, and from time to time, SD Compostela and Pontevedra CF have muscled in on the act. Even when on the previous occasion CD Lugo made it to La Segunda, the fun lasted for just the one season.
CD Lugo are not the first team from the city to play at the national level, that honour goes to  Sociedad Gimnástica Lucense who reached La Segunda for three seasons in the late 1940's. SG Lucense had a brief existence, having been formed in 1943 following the merger of  Sociedad Gimnástica Rayo and Lugo Spórting. The Copa de Galicia was won a year later and good form in the Tercera saw the club reach the play-offs in 1944-45 & 46-47. La Segunda was expanded to two regional divisions for the 1949-50 season and SG Lucense had a decent debut season, finishing 11th out of 16. A fourteenth place finish followed in 50-51, before the wheels came off a year later when the club finished in last place. Financially crippled by the expense of competing across the breadth of northern Spain, the club folded in the summer of 1952. Home matches had been played at the Campo Los Miñones, which had been built in 1934 and was situated on the Avenida de La Coruña.
Following the demise of SG Lucense, the city's other senior team, CD Polvorín, folded in 1953. Under the presidency of Emilio Núñez Torrón, a new club Club Deportivo Lugo was formed in June 1953. They conveniently took the place that CD Polvorin had vacated in the Tercera and played their home matches at the Campo Los Miñones. Not a great deal happened over the next 20 years. There was a couple of close calls for promotion in the early sixties, and the beginning of the decade Los Miñones was renamed Campo de Angel Carro, in honour of the president of the local arts council. CD Lugo dropped to the regional preferente for the first and only time in 1972, but returned to the Tercera a year later to see out its final season at the old ground.
In 1973, the local council bought the land on which Los Miñones stood and built a new stadium to the west of the city, on land above the Rio Miño. The Estadio Angel Carro was inaugurated on 31 August 1974 with a triangular tournament between the hosts, Deportivo La Coruña and CD Lemos. On opening it featured a main stand on the west side of the ground that had a low concrete cantilevered cover and was 60 metres in length. At the southern end of the ground stood a narrow terrace and the changing rooms, which were accessed from behind the goal. The whole of this end was covered in dozens of advertising hoardings. The east side was a full length open terrace, whilst the north end featured an open grass bank. With a capacity of 8,000, the city had a stadium that was ready for better things. Regrettably, CD Lugo was not and they remained stuck in the Tercera for another four seasons.

The Tercera title was eventually won in 1977-78 and with it direct promotion to Segunda B. Unfortunately, the club's stay lasted the one season and CD Lugo returned to the Tercera for another seven years. Another Tercera title and play-off victories over CD Leganes & Atletico Baleares secured promotion back to Segunda B in 1986. This elevation saw major development at the Angel Carro, with a new stand erected on the east side. This replaced the open terrace and also featured club offices and new changing rooms. Floodlights were installed, but not just any old floodlights. These were purchased from PSV Eindhoven and were switched on when FC Porto popped over the border for a friendly match. This time, Segunda B held no demons for CD Lugo, who made steady progress, so that by the early nineties, the club was challenging for promotion to La Segunda. 1990-91 saw the club miss out in the play-offs to CP Merida, but the following year, promotion was achieved when they topped their tough play-off group ahead of CF Extremadura, Sant Andreu & Elche. Their finally match against Sant Andreu did not pass without incident.
In the lead up to the club's debut in the second division, the grass bank at the northern end of the grand was redeveloped. In its place grew a modern, single tiered stand, with bands of red & white seats that ran the width of the pitch. A square, red brick suite of offices were also added to the north east corner. This did little to lift the club and their season long stay had few highlights. Scoring goals was a major problem, with just 23 scored in 38 outings. CD Lugo finished 18th out of twenty, and seven points from safety. What followed was a decade of mediocrity in Segunda B, before an inevitable drop back to the Tercera in 2003. It took the club three seasons to escape the Tercera and what has followed has been steady progress. This culminated in the club's first ever Segunda B title in 2010-11, but more heart-ache in the play-offs. Beaten by Real Murcia in the Fase de Campeones, where the winners gain direct promotion, CD Lugo then lost to CD Alcoyano in the final phase. Promotion back to the second division was finally achieved at the end of the 2011-12 season, thanks to play-off victories over SD Eibar, Atlético Baleares and Cádiz.
The stadium underwent a refurbishment in 2001, which saw the east and west sides of the ground seated, reducing the capacity to just under 4,800. The stadium was also renamed, taking on the Galician version, Estadio Anxo Carro. The overhaul also saw the end of the old changing block and narrow terrace at the southern end of the ground. For many years this was just a thin strip of grass and a high wall of advertisements, but in the summer of 2013, an open deck of seating was added, raising the capacity to 5,800. A roof was added to this section in the autumn of 2013, whilst the roof on the east side was extended over the the opening seating. Now that CD Lugo has finally returned to La Segunda, the Anxo Carro has been made to look angelic once again. 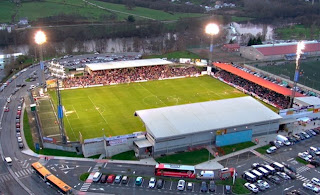 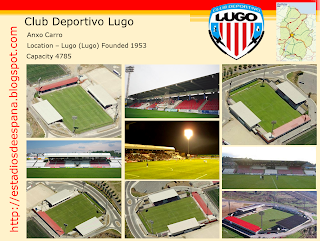