In the summer of 2007, Granada 74 founder and club President Carlos Marsá Valdovinos, bought the financially bereft second division club Club de Fútbol Ciudad de Murcia for 27 million euros and moved it lock, stock and barrel to Granada. You can read about his ultimately futile attempts to turn the team into a top club here. It was left to Evedasto Lifante Carbonell, a former director of Ciudad de Murcia to pick up the remnants and forge together a new club.
Following the buy-out, all that remained of Ciudad de Murcia was a reserve side in the Regional Preferente and a number of youth teams. Carbonell approached Escuelas Municipales Deportivas de Lorquí, a team with its own financial problems based 15 miles north west of Murcia, and purchased the club's place in the Tercera for 60,000 euros. He renamed the club Club Atlético Ciudad de Lorquí and the newly monikered outfit romped the the Tercera title in 2007-08, losing just one game in the process. In the play-offs, Ciudad de Lorqui beat Tomelloso and CF Villanovense to earn a place in Segunda B. After such an impressive start what could go wrong? Well quite a bit actually. Before the club had kicked a ball in Segunda B, they fell out with the local council, who owned the Estadio Municipal Juan de la Cierva and had an agreement for other local clubs to use the venue. Ciudad Lorqui upped sticks and moved ten miles south to Alcantarilla and the Estadio Municipal Ángel Sornichero. This prompted a change in name to Club de Fútbol Atlético Ciudad and later in the season, the club moved again, this time to Totana and the Campo de Fútbol Juan Cayuela.
Despite all the upheaval, Atlético Ciudad had a decent first season in Segunda B finishing eighth. However, with mounting debts, the club sought overseas investment form Brazil, which at least cleared some of the debt owed to the players in wages. Attempts to find a home ground in Murcia during that summer were rebuffed by the city council, so Atlético Ciudad went back to Lorqui and a refurbished Estadio Municipal Juan de la Cierva. In October 2009, Atlético Ciudad faced Sevilla in the fourth round of the Copa del Rey. With their own ground in Lorqui too small, the club approached Murcia Municipal Council to see if they could use a stadium in the city. This was met with a swift dismissal, so the tie was eventually played at the Estadio Cartaganova in Cartagena, with Atlético Ciudad losing 2-4. The club finished the 09-10 season in seventh position, but with debts in excess of 700,000 euros and the players wages outstanding, the federation demoted the club to the Tercera and within a week, Atlético Ciudad was no more.

As for the Estadio Municipal Juan de la Cierva, well after all the toings and froings, the town of  Lorqui has a decent small stadium, but nobody of any merit to play there. Originally built in 2003, it was until the 2009 refurbishment just a couple of open terraces and and hard standing. The improvements saw an additional terrace added to the east side of the ground and a basic cantilevered cover erected over a few hundred seats on the same side. This raised the capacity to 2,500. Whilst Atlético Ciudad have gone and Lorqui has no senior team, some good has come out of this rather squalid affair. A fans co-operative was started in October 2010 and the team, Club de Accionariado Popular Ciudad de Murcia currently play in the lower reaches of the regional leagues. Where do they play? Somewhat ironically, the club plays their home matches at the Estadio El Arenal in Murcia. 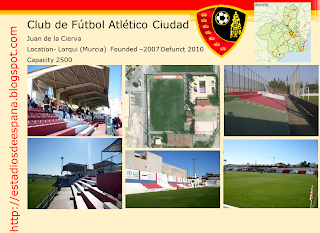