La Línea de la Concepción is the town on the opposite side of Spain’s border with Gibraltar and because of its close proximity to the Rock, they have developed a close relationship over the years. That is when they have been allowed to. Back in 1969, Spain closed its border with Gibraltar following the breakdown of talks with Britain over sovereignty. In a fit of posturing and possibly in response to the thousands of jobs that had been lost overnight, Franco’s government started a building programme in La Linea, that included the Estadio Municipal de La Línea de la Concepción.
At the time, the town’s club Real Balompédica Linense or La Balona, was playing at the Campo San Bernardo, which was an incredibly cramped and basic ground, just 300 metres north from where the new stadium was being built. It had seen some success when La Balona reached La Segunda in the 1949-50 season, where they stayed for six seasons, never threatening the promotion places. When they were finally relegated at the end of the 1954-55 season, they went out in style, conceding 97 goals in 30 matches.
The new stadium opened on 15 October 1969 when La Selección beat Finland 6-0 in front of the stadiums first and to date, only full house. Here is some great footage of the opening festivities and match. Four days later La Balona drew 1-1 with Cadiz in their first match at the stadium. Whilst La Balona could not have continued to play at San Bernardo for too much longer, did they or for that matter the town need a stadium that held over 20,000 people? There have been large crowds at the stadium since it opened, as La Selección returned in 1984 to play Yugoslavia in a friendly. Then there are the derbies against Algeciras which pull in a large followings and in June 1999 La Balona won promotion to Segunda B after a 2-2 draw with Hellin Deportivo.
The stadium has encountered problems with the quality of the concrete used its construction, and in 1991 the club had to play some matches away from the stadium whilst repairs were conducted. More substantial renovations were carried out in 2003 and in 2009 an artificial pitch was installed. Whilst outdated and way too big for the size of the crowds that La Balona attract, it is still a striking enclosure, with its deep concrete cantilevered roof, large east terrace that houses the changing rooms and oh yeah... and bloody great monolith to the south. If, or more likely when, the town tires of the stadium and decides to build a replacement, they would surely keep the southern end open, as money can’t buy that kind of backdrop. 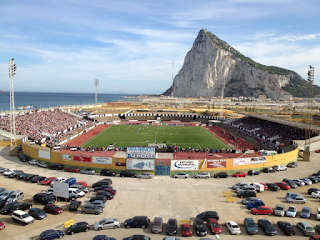 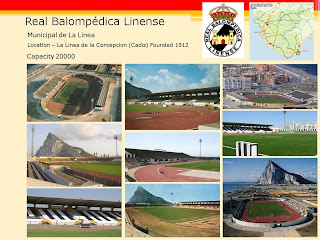