The city of Cádiz is the oldest inhabited city in Iberia and is also home to the Spanish navy and one of southern Europe's largest commercial ports. All crammed onto a thin strip of land on Spain's southern Atlantic coast, you could be forgiven for thinking that this mix of ancient culture and commercial and naval dockyards makes Cádiz a bit edgy. Well nothing could be further from the truth as the citizens of Cádiz  and in particular, the followers of Cádiz Club de Fútbol are among the most passionate and friendly in the land. All of which makes the newly refurbished Ramón de Carranza a fantastic place to watch football
There is much conjuncture about the date on which club was formed. Some can trace the club back to 1903, others 1908 and the official line from Cádiz CF is 1910. Whatever is the correct date, not a great deal happened until 1931 when Sociedad Cultural y Deportiva Mirandilla Foot-ball Club registered with the Andalucian federation. The club played at the Campo de Velodrome until 1933, by which time the municipality had built an enclosed ground next to the city's Plaza del Toros. The Campo de Deportes Mirandilla as it was known opened on 27 August 1933 with a match against Real Betis. This basic ground served  the club as home for twenty two years, during which time FC Cádiz, as they became known in 1936, gained promotion to La Segunda and in the first season following the Civil War, just missed out on promotion to La Primera. Normal service was resumed shortly afterwards as Cádiz slipped back into the Tercera in 1943. This square enclosure in the shadow of the city's bullring, had four narrow, open terraces with the only cover being provided by canvas sheets stretched over the directors area. The ground was damaged following a massive explosion in the navy dockyards in August 1947 and whilst they played on at the ground for another 8 years, it prompted the club to look for a new home. The Campo de Deportes Mirandilla was given an emotional send off when the club won promotion at the end of the 1954-55 season.
Work had begun in May 1954 on a new stadium on the south-eastern edge of town. Designed by Manuel Muñoz Monasterio and Fernandez Pujol, who worked together on the Estadio Santiago Bernabéu, the stadium consisted of a ring of terracing around the pitch, with a raised tribuna on the western side. The ground was oval in shape and had a capacity of 15,000. On the east side was an Olympic Tower or La Torre de Preferencia as the locals preferred to call it.  It opened on 3 September 1955 with a friendly against Barcelona. A few days later, the inaugural staging of the Trofeo Ramón de Carranza took place. Like the stadium, this was named after the club president and mayor of Cádiz who was instrumental in the building of the stadium. The tournament quickly became the most prestigious pre-season tournament in Spain and the money raised through gates receipts helped Cádiz  tremendously.

Cádiz stayed in La Segunda for all but one of the next 22 seasons, the only blemish being a season long trip to the Tercera in 1969-70. During this period, the club never effectively challenged for promotion, but that all changed when Cádiz claimed the runners-up spot and promotion to the top flight in 1976-77. Their first season in La Primera ended in relegation with the club bottom and eight points from safety. Cádiz however, liked the taste of La Primera and over the next eight seasons won promotion to the first division on three occasions. Central to this upturn was the enigmatic talent of Magico Gonzalez, which gives me the opportunity to show this. The stadium underwent a 400 million peseta redevelopment in 1984 which saw a roof added to the west tribuna and the complete rebuilding of the northern fondo, which eliminated the curved end and brought the fans closer to the pitch. La Selección visited the Ramón de Carranza on three occasions between 1979 and 1986 and tested the new capacity of 23,000. Cádiz made the most of their improved surroundings and ran up eight consecutive seasons in La Primera from 1985-86, albeit eight consecutive fights against relegation. The club finally fell to La Segunda in May 1993 and a year later dropped a further level to Segunda B.

The remainder of the 1990's rarely saw Cádiz challenge the leaders, but the start of the new millennium brought new hope when the club won the Segunda B Group VI title only to lose out in the play-offs. In February 2002 the club announced that the stadium would undergo a major rebuilding programme that would see the ground completely rebuilt. The project was to be funded by private money, with a sizeable sum coming from the sale of commercial outlets within the body of the new stands. However, as the project near completion, it was the local council who had funded most of the build. On 31 March 2003 work began on demolishing the South Fondo, with the east preferencia and Olympic tower following in the summer. In their place rose two twin decked open stands, with broad bands of yellow and blue seats. The new stand on the east side was flanked by two corner towers which contained office space that overlooked the pitch. Delays in financing and construction meant that the 25.25 million euro addition to the stadium did not officially open until 3 August 2005. Just in time for Cádiz's return to the Primera for the 2005-06 season. La Selección paid a visit to the lop-sided ground in November 2006, but lost 0-1 to Romania.
For the fourth time in the club's history, their stay in La Primera lasted just the one season. a lack of goals and rather worryingly, poor home form saw the club finish one from bottom of the league. Relegation to the La Segunda did not deter the club from rebuilding the North Fondo.  Work began on 20 November 2006 on a replacement that would be identical to the South Fondo. This took the better part of two years to complete and when it did open on 13 August 2008, Cádiz had fallen a further level to Segunda B. A quick return to the second division was followed by an equally quick drop back to the third level, all of which played havoc with the club finances. Despite teetering on the brink of bankruptcy, Cádiz and the local council have ploughed on the final phase of the rebuilding of the Ramón de Carranza, a replacement for the ageing west tribuna and corner stands to link the whole development together.
Work began in the spring of 2011 and was finally completed in July 2012. Too late to assist Cádiz in a push for promotion back to La Segunda, where they lost on penalties to CD Lugo in the final. The new stand took the capacity up to 25,033, but came at a cost of €26 million. It's just as well that it looks stunning with two tiers of yellow & blue seats sandwiching two rows of corporate hospitality boxes. I particularly like the way that the floodlights have been incorporated into the fascia of the roof, looking like a sleek and very expensive cooker hood. The whole project cost upwards of €80m and council will now focus its efforts on selling as much of the hotel, retail & office space that occupies the guts of the stadium. The new Tribuna was unofficially opened when the Spanish Olympic team played their Mexican counterparts on 18 July 2012. Here's hoping that La Selección pay a return visit in the not too distant future.
Now at this point, I should declare more than a passing interest in the Estadio Ramón de Carranza. Back in 2003 I did some work as a consultant for a well known football managerial video game and this hotchpotch of a stadium was the first that I worked on. Back then the stadium looked tired, with its roof corroded by the salty Atlantic air, but now? Well now it is simply fantastic. Its tight lines and steep sides, mixed with a passionate home support, should turn it into a formidable fortress. With the stadium complete and fully enclosed, it should bring to an end a decade of uncertainty for Cádiz CF, leaving it to focus on returning to La Segunda, with perhaps occasional forays into La Primera. Oh, how they could do with a Magico Gonzalez now? 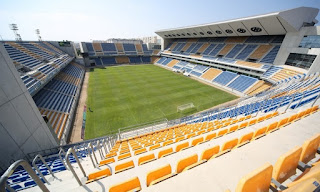 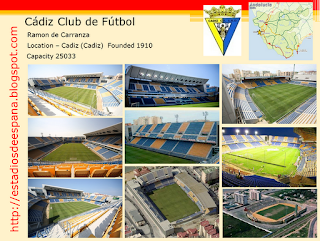