Club Esportiu Mataró the current occupants of Municipal Passeig de Carles Padros, were not the first team to play at this ground. Back in 1935 Iluro Sport Club, another team from Mataró, bought the current plot of land and developed a basic stadium. Opened on 25 December 1935, Iluro SC played very few games at their new ground, for the Civil War put pay to the club and it was wound up in July 1939.
Within days, Club Deportivo Mataro (no Catalan spellings allowed back then) was formed, took on Iluro's colours of black and gold and took up residency at their former ground. And that, apart from 4 seasons in Segunda 2b from 2000-01, is about it. Since relegation the club has struggled and two successive relegations have led to CE Mataró playing its football in the Catanlunya Preferential Territorial, or to simplify matters, level six. Then in January 2011, the senior team resigned from the league and folded. In August, the club reappeared in the Segona Catalana, or level 8.
﻿﻿﻿﻿The ground is another basic enclosure and would challenge Badalona's Camp del Centenari for the title of most rudimentary to appear at level three in the past decade or so. Shoe-horned between housing and industrial units, the ground comprises of between four and seven steps of terracing around  the ground, with practically no cover available. My guess is that the club's officials would watch from the club house behind the west goal, which also houses the changing facilities.
Very humble surroundings, but a stage that has been graced by one of today's finest players. In 1997, a 10 year-old lad for nearby Vilassar de Mar left CE Mataró, the club where he played junior football, and joined FC Barcelona. His name? Cesc Fàbregas. 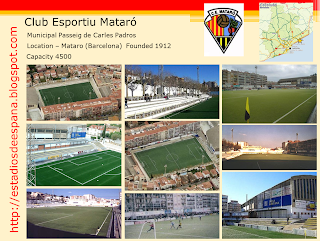