Estadio La Magdalena has been the home of Novelda CF since it opened in 1949, and throughout much of its history, it has staged football at either regional or Tercera level. It was and to some extent still is a basic stadium, but up until the mid 1990’s it had a dirt pitch and one basic cover. Then the team got its act together and from 1995 there followed a decade of relative success with three promotions to Segunda B and in 2000-01 their highest placed finish of fifth, losing out on a play-off place to Espanyol B on the head to head record.
During this time a natural turf pitch was laid and four rows of green seats were installed along each side of the pitch. New press facilities were built opposite the main stand, and this box sits on stilts above the seating on the halfway line. The ground holds 7,000 and was packed to capacity on 11 September 2002 when Novelda CF achieved their most famous victory.  FC Barcelona was the visitor in the first round of the Copa Del Rey and was beaten 3-2 with Madrigal scoring a hat-trick.
Novelda CF returned to the Tercera in 2005 and has rarely looked like returning to Segunda B. The only change to the stadium came in January 2010 when the municipality replaced the grass with artificial turf. 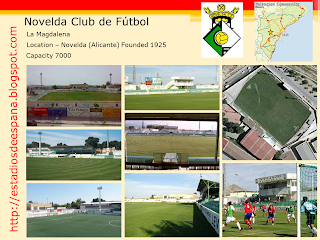