La Bañeza!... Where the bloody hell is that? Well if you must ask it's around 30 south west of León. Frankly, I'm surprised you don't know. Anyway, do you want to know some more about the club or are you just happy with the fact that they have a brilliant purple and white striped stand behind the goal?


Okay, a brief history. La Bañeza FC was formed as Club Deportivo La Bañeza in 1956 and has spent almost half of the past 55 years in the Tercera. Their best finish was in 1999-00 when they finished second in the Tercera and entered the play-offs for promotion to Segunda B.  Regrettably, they came up short and finished third in a group that also featured Alcorcon and Lealtad. The only other time they appeared in the play-offs was 2002-03, when they finished bottom of a group behind Rayo Majadahonda, Titanico & Cerceda.
﻿﻿Did I mention that they had a brilliant purple & white striped stand behind the goal? Oh I did! The rest of the ground features a basic cover on north side of the ground, open terracing on the remaining two sides and club house in the south east corner. The club is currently in the Regional Primera Group B, that’s level five to you and me. 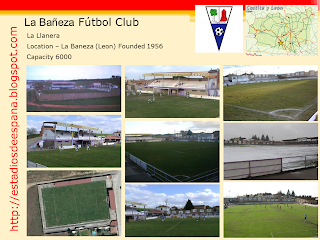