Club de Futbol Gavà started life as Gavá Athletic FC in 1922 and have spent most of the last 90 years kicking around in the Catalan regional leagues. They first reached the Tercera in 1956, by which time they had changed their name to CF Gavà and left their first ground at La Colomera at set up home at the intriguingly named American Lake. The appearances in the Tercera were fleeting and they really did not establish themselves at the fourth level until the late 1970's.


The 1980's were interspersed with returns to the Catalan Primera and also saw a move in 1986 to the Estadio Municipal. CF Gavà won promotion to the Tercera in 1994 and a season later, thanks to the demise of Palamos CF, they won a play-off and promotion to Segunda 2b. Promotion to the third level coincided with a move to their current home La Bobila. They managed a seventh place finish in 1995-96, but there followed three seasons of diminishing returns before they were relegated back to the Tercera in 1999. Seven of the next eight seasons were spent in the Tercera, with 2002-03 providing the only interlude with a season long stay back in Segunda 2b. In 2006-07, CF Gavà finished fourth in their Tercera category and in the play-offs beat Jerez CF and Poli Ejido B to gain promotion to Segunda 2b. 2007-08 was to be their most successful to date when, under the guidance of Antonio Llebadía, the club finished third in the league and entered the play-offs for La Segunda for the first time. Here they met SD Huesca and after a 2-2 draw at home, held the Aragonese side to a 1-1 draw in Huesca, but lost out on away goals. Since then, CF Gavà has slipped back into the Tercera.
The municipality built La Bobila in the mid 90's and it is a multi-use site in the west of the town. The simple style and location, surrounded by tenements, give the impression that it is older than its 16 years. The main stand on the east side holds 800 under a propped cantilevered roof and there is a thin row of seats between the athletics track and the front of the stand. On the opposite west side is an open bank of seats and along with hard standing, the stadium has a capacity of 4,500. The more observant may also notice a 50-foot chimney slap-bang in the middle of the west seating. The municipality decided to leave it intact as a reminder of the tannery that occupied the site of the stadium before redevelopment. 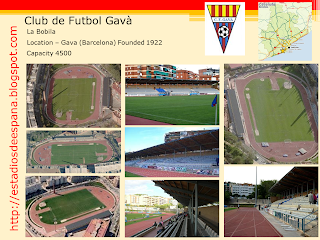