The London 2012 Stadium debate has thrown up the old chestnut of a football ground with an athletics track around the pitch. I'm not a fan of the set-up, but for some smaller clubs, playing at the local municipal stadium is the only feasible option. That's not to say that some are not without their charms.

Jerez de los Caballeros is a town of 9,800 inhabitants, 30 or so miles south west of Almendralejo and the local team, Jerez CF has at times, punched above its weight. For seven seasons from the late nineties, Jerez CF played at the Segunda B level. The past few years have seen the club finish high in the Group 14 of the Tercera, only to miss out on promotion via the play-offs. A good history of the club can be found on their Wikipedia page .
The Estadio Manuel Calzado Galvan is an archetypal municipal multi-sports stadium, but with some nice touches. These are found on the main stand, a 60-metre raised structure, with a barrel-vaulted cantilevered roof. This sits high above the seated area of green & red seats, in order to accommodate media booths at the top of the stand. However, it is outside the ground that you come to appreciate the stand. The rear wall has a centre section where two balconies and the media booth sit above the main entrance. All pleasing symmetrical and thanks to a liberal dose of whitewash, almost blinding under the summer sun. Opposite the main stand is an expense of hard standing, at the back of which is a 50 metre stretch of terracing, which is rarely used, due in part to its distance from the pitch. All very easy on the eye, which considering the fact it has an athletics track, is praise indeed. 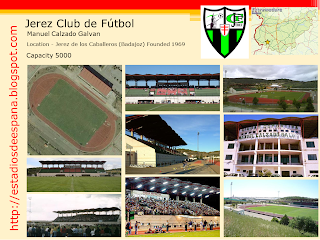