Any stadium that has the unofficial title of Wolf Ravine (Barranco del Lobo) has immediately won me over. When you learn that the official name is magnificently grandiose (Campo Nuestra Señora de la Caridad or Virgin of the Charity) and that the enclosure is easily as quirky as either of its names, then I’m like a randy tom that’s fallen into a barrel of catnip. However, before I prematurely articulate about this fantastic little stadium, let’s have a look at its occupants, Club Polideportivo Villarrobledo.
Football had been played in this town on the La Mancha plain since the 1920’s, with the focal points being the Campo de Sedano and the Campo de San Antón. By the mid-1950’s the town’s main club, Villarobledo Fútbol Jugadores, had established themselves in the Primera Regional Castellana. San Antón was extremely basic, and so the town council agreed to fund the building of a new stadium. They chose the site of the aforementioned Barranco del Lobo, a makeshift quarry just to the north of the town centre, and worked commenced in the spring of 1957.
The driving force behind the new build was Emiliano Rubio Sevilla, a building contractor and councillor for public works. Over the course of the next year work continued on filling in the quarry, constructing a level field and building terraces up to the level of the surrounding streets. The stadium officially opened on 19 March 1958 and cost the local municipality 375,000 pesetas. On 15 June 1958, Villarrobledo Fútbol Jugadores won promotion to the Tercera. It would be their last act, as in the summer the club was wound up, and a new team and constitution was drawn up in the name of Club Deportivo Villarrobledo. The new club took the place in the Tercera its predecessor had earned and continued its good work.
CD Villarrobledo first ever season saw them finish runners-up to Calvo Sotelo in the Tercera, and enter the play-offs for a place in La Segunda. Linares was disposed of 3-2 on aggregate and hopes were high when Jerez CD was beaten 2-0 at the Nuestra Señora de la Caridad. Unfortunately, an 8-1 reverse in the second leg temporarily halted their Segunda ambitions. Villarrobledo finished third the following season, but returned to the play-offs a year later, after finishing runners-up to Calvo Sotelo once again. Real Avilés were disposed of and, in an act of revenge, so were Jerez CD, before CD Castellón were beaten 3-1 on Aggregate. Just three years after formation, Villarrobledo had reached La Segunda
The 1961-62 season saw the second division split into North & South divisions, with Villarobledo joining 15 other clubs in the southern section. There is little point in dressing-up their debut and to date, only season in the second tier. Villarrobledo endured a torrid time, winning just four matches and gaining a paltry 12 points. Every away fixture was lost and the club was relegated with three games to play. With their spirit well and truly broken, Villarrobledo lost those final three fixtures, conceding 20 goals in the process. Six seasons in the Tercera followed, before the club was relegated to the Regional Preferente in 1968. The club lay dormant for a couple of seasons, before reforming as Club Polideportivo Villarrobledo in 1971. Starting from scratch, CP Villarrobledo joined the Murcian Federation and made steady progress through the regional leagues, before earning promotion to the Tercera in 1980. And here they have remained. Never troubled by relegation in the succeeding three decades, often pushing for promotion, and occasionally reaching the play-offs for Segunda B. The club won its first Tercera title in 2012, but fell in the play-offs for a tenth time.
So let us venture into Wolf Ravine, or Campo Nuestra Señora de la Caridad if you prefer. The streets around the ground offer-up few clues that there is a football ground on the other side of the white-washed walls. Sure, you can see the floodlights, but only the top of the masts, such is the depth of this practically subterranean wonder. Once inside Villarrobledo's home, you are presented with a series of idiosyncratic treats. Lets start with the only cover, a full length stand on the west side of the enclosure. Six rows of red & blue bucket seats are bolted to the original wide terracing. These run from the south west corner to the edge of the northern penalty box. The cover is held up by dozens of thin Meccano-like props, and dates from the mid-1970's, but it looks much older.
The northern end of the ground is an amazing mix of steps and greenery, which look more like the terraces of a steep garden, than those of a football ground. Behind the northern goal is a beautifully manicured grass bank which features the club crest. The eastern terrace is the most uniform section of the ground, with six wide steps of open terracing. These steps run around the south east corner and link up with southern terrace. The club's offices and changing rooms sit atop this terrace, and pitch access is gained through two rows of privet hedges. Finally, as if to emphasize the fact that you are pretty much in the middle of La Mancha, just opposite the southern entrance is a statue of Don Quixote and Sancho Panza. The Spanish U-21 side paid a visit on 9 October 1999, beating Israel 2-1 in a UEFA qualifier. The Campo Nuestra Señora de la Caridad is the complete antithesis of everything that you will find in a modern stadium, and I love it! 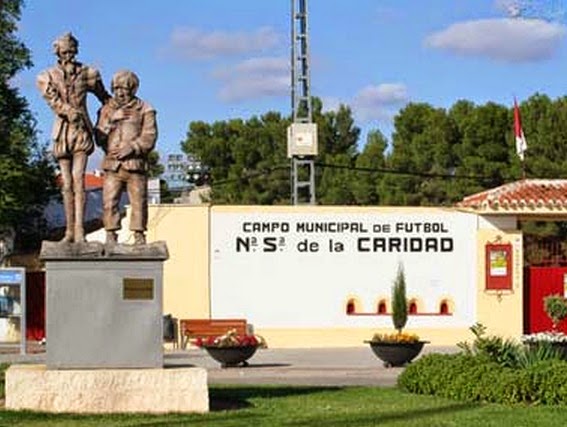 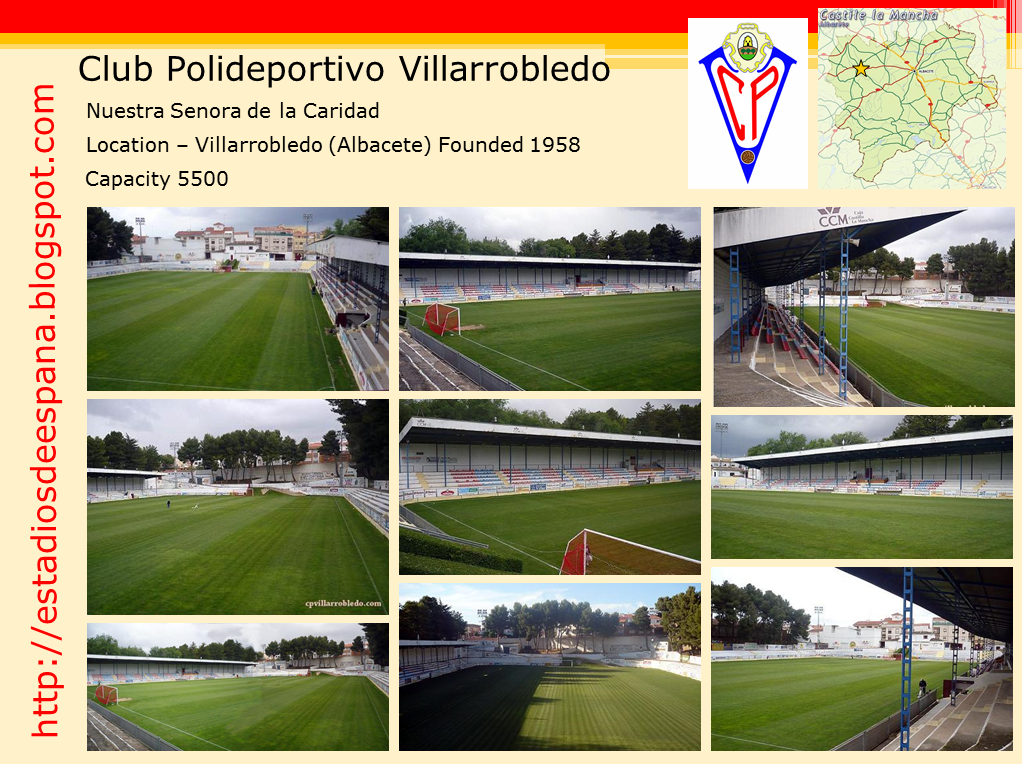 All photos courtesy of cpvillarrobledo.com