Hang out the bunting and book a marching band! I bring news of a new Spanish stadium! Actually it’s not that new and before I get too carried away, its development has resulted in the loss of one of my favourite old stands. Mixed emotions then. The stadium in question, the Estadio Ciudad de Alcalá, opened in May 2011 in Alcalá de Guadaíra. Alcalá is now effectively a suburb of Sevilla, but for many years it was a town in its own right, some 10 kilometres south west of the centre of the capital of Andalucía.
Despite its close proximity to Sevilla, it was not until the mid 1930's that a senior team emerged from Alcalá. Several clubs joined the Federación Sur after the Civil War, but all failed to make an impact, so in 1945 a proposal was made in the local press to form a select team. Founded on 13 October 1945, Club Deportivo Alcalá set up home at the Campo de Santa Lucia and within a couple of years had progressed to the Primera Regional. Over the next 15 seasons, CD Alcalá became something of a stalwart of the Regional Andaluza, but failed on a number of occasions to make the step up to the Tercera. Perhaps buoyed by the prospect of  a new stadium, the club finally earned promotion to the Tercera in June 1965. CD Alcalá debuted in the Tercera and at their new Estadio de La Victoria on 12 September 1965, earning a 1-1 draw with CD San Fernando. The stay in the Tercera lasted 5 seasons, with a high finish of sixth in season 67-68.  However, restructuring of leagues in 1970 saw CD Alcalá demoted to the Regional Preferente, despite finishing eleventh out of 20.
It would take a further 12 seasons for CD Alcalá to return to the Tercera, and in the meantime, the Estadio de La Victoria was renamed the Campo Municipal Francisco Bono, in honour of the club president in 1974. Alcalá returned to the Tercera in 1981 for a three year spell, but following a disastrous 1983-84 campaign, they dropped back to the Regional Preferente where they would remain for the next 17 seasons. Their return to the Tercera in 2001 was followed two seasons later with their first Tercera title. Alcalá successfully clocked-up play-off victories over UP Plasencia & Club Hellin Deportivo to secure a place in Segunda B. For its debut in the third tier, the club’s Francisco Bono home was given a make-over, which was more nip & tuck than reconstructive surgery. The old, raised main stand that had stood on the south side of the ground since opening in 1965, was given a new roof, a liberal coat of white paint and 150 bucket seats, which were  installed in front of the directors box.  A narrow terrace was built at the eastern end of the enclosure, whilst the wide steps of northern terrace were painted in the club’s blue & white colours. A short cover was erected in the south west corner, close to a squat tower that stood closed to the main entrance.  Nothing dramatic, but perfectly respectable. As was Alcalá’s form in a first season that saw them record a 15th place finish. The club also drew Real Betis in the Copa del Rey, eventually losing on penalties after drawing 0-0 after 120 minutes. That home tie with Betis drew a crowd of 6,000 to the Francisco Bono.

Three further seasons in Segunda B saw Alcalá record a high finish of eighth in 2005-06, before dropping back to the Tercera in June 2008.  A second Tercera title followed in 2010, with promotion gained following 3-2 victory over C.D. Corralejo in play-offs. However, whilst the club returned to the third tier, the Estadio Francisco Bono did not. The local municipality was  already committed to redeveloping the site, so for the majority of the 2010-11  season, Alcalá upped sticks and played their home games at El Viso del Alcor, some 10 miles to the north east. Finally on Sunday 8 May 2011, Alcalá returned home when they played host to Puertollano in the first game at the new Estadio Ciudad de Alcalá. It was the penultimate game of what had been an unsuccessful season, but here was a chance to go out on a high. Alcalá’s defender Nani had the distinction of scoring the first official goal at the new stadium, but unfortunately for him, it was in his own net. Alcalá trailed 0-3 at half-time, but rallied in the second half to earn a 3-3 draw. A week later and a 3-1 defeat away at promotion chasing Sevilla Atletico, consigned Alcalá and their new stadium to the Tercera.
Funded to the tune of €2.4m by the local municipality and the Junta de Andalucía, the new Estadio Ciudad de Alcalá may occupy the same land, but it is unrecognisable from the old Estadio Francisco Bono. Work commenced in May 2010 and after the old structures were raised to the ground and the site lowered, the orientation of the field was rotated by 90 degrees. The new artificial pitch runs from north to south, with the main stand now situated on the west side.  This west side features a low central cantilevered cover, underneath which are 251 seats. Either side are two banks of open seating, which has a combined capacity of 594. The west side also houses media booths, club offices, bars and a gymnasium. The east side of the stadium has 1416 seats arranged on an open bank, with a wide concourse at the rear. This area has been designed to allow up to 1000 additional seats to be added, should the need arise. Clever use of semi-opaque sheets allow light to flood in in at either end of the stadium, whilst stopping any possibility of a free view. The sheets have also been used to clad the four floodlight towers, which stand on the eighteen yard line, rather than the corners of the site. Functional and pleasing on the eye, the Estadio Ciudad de Alcalá has drawn attention and admirers from across town.  In February 2014, Real Betis trained on the pitch ahead of their Europa League tie away to Rubin Kazan. 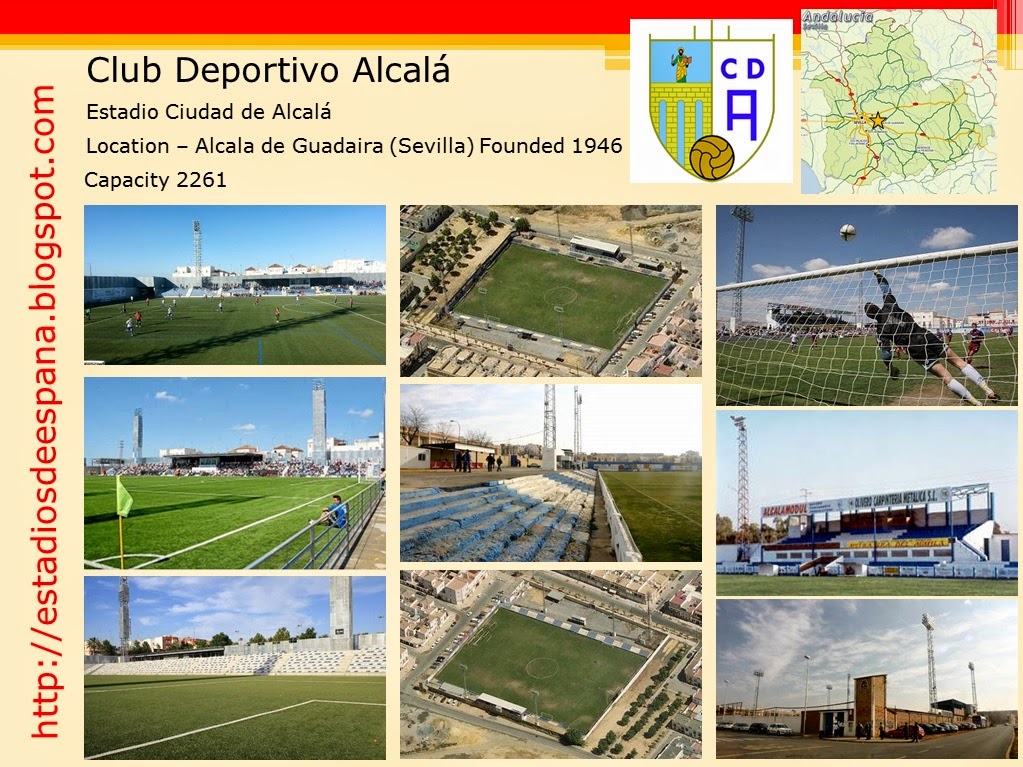