Marbella - Playground to the rich and home to Europe’s swankiest millionaires. A city where Bentley’s and Bugatti’s promenade with monotonous regularity, and where oligarchs moor their super yachts for the summer.  So you would be forgiven for thinking that in this “Money no object” environment, just a little would have filtered through to the local football club and its stadium?
Well… not quite. Whilst the glitterati live the high life in the city’s Puerto Banús district, Marbella Fútbol Club ply their trade a few miles to the east in the distinctly working class back streets of the old town. Football in Marbella has always been on the fringe. Always in the shadow of its bigger neighbour Málaga. Occasionally trying, but never quite managing to break through into the big time. Even on the one occasion it did gain a footing in the national leagues, it did so with the financial backing of one of Spanish football’s most notorious characters.

The first club from Marbella to register with the RFEF was Club Deportivo Marbella, who can be traced back to 1942, before finally joining in 1947. They lasted little over a decade, before folding with financial problems in 1959. This paved the way for Club Atlético de Marbella who soon made headway, appearing in the Tercera in 1963. Here they stayed for seven seasons, before flitting between the Tercera and regional leagues throughout the 1970’s. Home for both Deportivo & Atlético was the Campo Francisco Norte, a compact enclosure of open terraces. Eucalyptus trees lined the stadium's white washed walls, whilst the dirt playing surface sloped noticeably from north to south. It remained home until the end of the 1974-75 season. Three consecutive second place finishes in the Tercera in the early 1980’s finally led to promotion to Segunda B in 1984. It was a season long stay, but they returned two years later and in 1988-89, they recorded their best finish of sixth place. Relegation back to the Tercera followed in 1990, which is when Mayor of Marbella and professional misanthrope Jesús Gil took over the club. The impact of his investment was immediate, with consecutive promotions earning the club a place in La Segunda for the first time.
Atlético’s first season in the national leagues saw a very creditable 7th placed finish. Always on the fringe of promotion and occupying a play-off place with just six matches to go, their season tailed-off dramatically with 4 consecutive defeats. Two seasons of mid-table finishes followed, but Jesús Gil’s thoughts were now totally focussed on his role as President of Atlético Madrid and the obsession of wresting the La Liga title away from Real Madrid & Barcelona. Gil sold the club to Serbian entrepreneur Boban Petrović in 1995, at which point things went rapidly down-hill. Bottom of the table at the mid-point of the 1995-96 season, Atlético failed to win any of its last 23 fixtures and was relegated to Segunda B. Worse was to follow as Petrović’s mismanagement saw the club accrue large debts and players going unpaid for much of the 96-97 season. Unsurprisingly, Atlético finished bottom of the league. With the players’ wages still outstanding, the RFEF demoted the club to the Regional Preferente on the 1 August 1997. Bankruptcy followed shortly after.
Following Atlético’s demise, two local clubs, Unión Atlético Marbella & CD Cultural joined forces to form Unión Deportivo Marbella. The club won the Regional Preferente title in its first season, winning promotion to the Tercera. There followed 5 seasons of decent performances culminating in promotion to Segunda B in 2003. The club’s stay in the third tier peaked with a fourth place finish in 2008-09 and a place in the play-offs. Alas, any hope of emulating their predecessor’s time in La Segunda was ended by a first round defeat to Lorca Deporitva. As so often is the case following a play-off defeat, the season that followed was dreadful, ending in UD Marbella’s relegation to the Tercera. Here they have stayed, changing their name to Marbella Fútbol Club in June 2013.
Despite its magnificent views of the Sierra Blanca, the Estadio Municipal de Marbella is a tad underwhelming. Opened in 1975, it was originally called the Estadio Municipal Utrera Molina, after a falangist & minster under Franco's regime. It is the archetypal small municipal stadium, the likes of which sprung up over southern Spain throughout the 1970’s. It is essentially a featureless oval, made up of two semi-circular end terraces and two side stands. The west tribuna has a small area of seating, the central section of which is covered by a short 10 metre-long roof. This stand also houses offices, bars and a press room. The opposite east preferente is identical in size, but was fully seated in 2013. It has no roof and houses the stadium’s changing facilities. The excellent playing surface is surrounded an athletics track, all of which adds to the sense of mediocrity. Its capacity of 7,300 has been rarely tested since the start of Atlético’s decline in the mid 1990’s, and as things stand, it is unlikely to be tested any time soon. After all Marbella may be many things, but it isn't a footballing city. 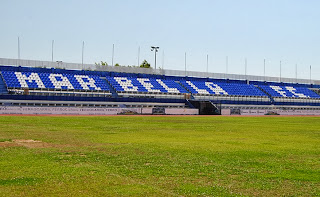 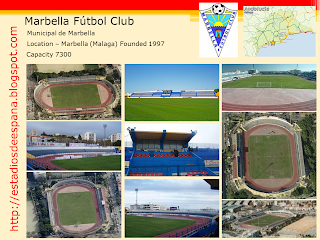