The Romans liked what they saw of Calahorra. Arriving in 189BC they renamed the town Calagurris and made it a 'Civis Romanus', building baths, a circus maximus and an amphitheatre. The city also minted coins and served as the region's judicial centre. Unfortunately, being a big-wig in the Ancient Roman Empire doesn't necessarily mean you'll cut the mustard in modern-day Spanish football. With the exception of two short visits to Segunda B, the city's main club Club Deportivo Calahorra, has spent the majority of its time in the Tercera.
The first serious club to emerge from the city was Sociedad Cultural Deportiva Calahorra. Formed in 1923, they played on land that overlapped the current site of La Planilla (Albeit at 45 degrees from today’s layout and parallel with the Avenida Nuestra Señora de Valvanera). By 1933, Calahorra FC had taken on the mantle of the city’s senior team and played its matches at a field to the east of the city, close to the Calle de la Algarrada. Calahorra FC was a member of the Federación Cantabra and reached the Play-offs for La Segunda in 1936, losing out in the first round to Santoña. Following the Civil War the Mayor of Calahorra, Antonio Martín Pérez, allocated funds for the development of the old football field that SCD Calahorra had used. The site was renamed Campo de La Planilla and by 1944 was enclosed and the pitch fenced-off. However, any momentum that Calahorra FC had built before the war was now  lost, so in 1946 the current club, Club Deportivo Calahorra was formed.
In 1947, the CD Calahorra joined Federación Guipuzcoana, winning the La Riojana section, before joining the Federación Navarra a year later. Further success followed with promotion and on 4 September 1949, CD Calahorra made its debut in the Tercera with a 3-1 defeat in Zaragoza at the home of SD Escoriaza. Despite a close-call in its debut season in the Tercera (They survived a relegation play-off), thoughts turned to developing La Planilla. In 1952, a new 45 metre long Tribuna was opened on the west side of the ground. Featuring six rows of bench seating under a propped roof, this delightful stand still adorns the enclosure, and thanks to a new roof and liberal amounts of red & blue paint, belies its age. CD Calahorra spent 25 of the next 35 seasons in the Tercera, and La Planilla remained relatively unchanged.

The club won its first Tercera title at the end of the 1987-88 season, and with it promotion to Segunda B. A respectable 13th position was earned in their first season in the third tier, which was followed by a more difficult season and a penultimate finish that resulted in relegation back to the Tercera. There followed a period of relative dominance at regional level, with four further league titles and six visits to the play-offs over an eight year spell. The new end of season format had proved troublesome for the club, but after their fifth league title in 1998, CD Calahorra topped their play-off group and returned to Segunda B. This was to prove a longer stay, with the highlight being a third placed finish in 2000-01. This led to an appearance in the play-offs for a place in La Segunda. The fight went to the final tie, and despite finishing level on points with Polideportivo Ejido, they lost out on the head-to-head record. The squad (which included a young Carlos Cuéllar) disbanded, and there followed a slow decline and a return to the Tercera in May 2004.

CD Calahorra remain in the Tercera and to be frank, La Planilla seems ideally suited for this level. Opposite the old West Tribuna is an open terrace of four steps, at the centre of which stands a television gantry. The newest part of the enclosure is the Fondo Norte, which dates from the late 1980's and features 12 rows of bench seating under a cantilevered roof. This stand also includes the changing facilities, club room and bar. Hardly architecture on a Roman scale, but I like it all the same! 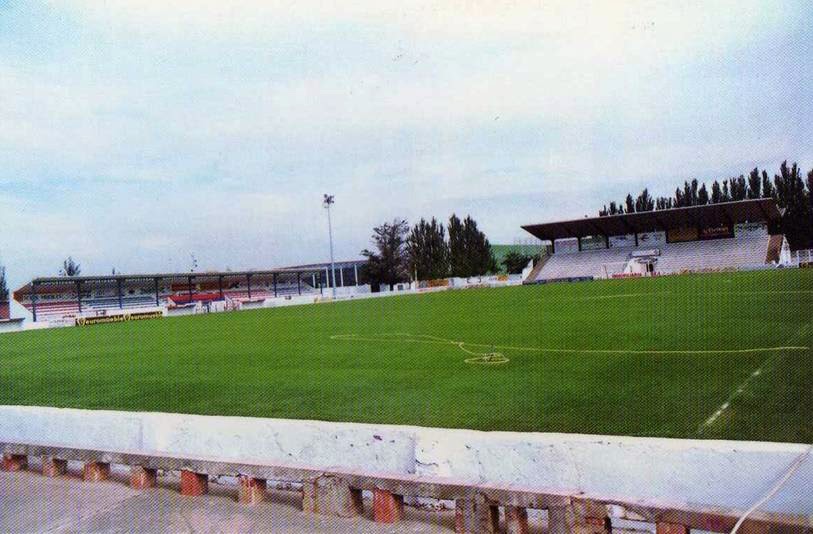 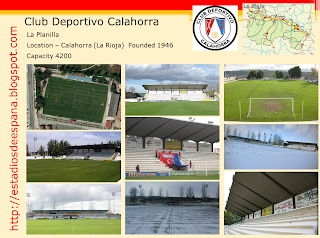