Córdoba Club de Fútbol B has joined the growing number of La Liga clubs with a reserve outfit in Segunda B for the 2013-14 season. Formed in 1997, this will be Córdoba B's first season in the third tier, after clocking-up 13 seasons with very little reward in the Tercera.
That all changed in the summer 2013. After finishing runners-up in Group 9 of the Tercera, Córdoba B could have been forgiven for thinking that their first venture into the end of season play-offs was merely a learning experience. After seeing off the challenge of Castellón, hopes of promotion appeared to be over after losing out on away goals to another band of reserves, Granada B. However, the demotion to the Tercera of financially troubled Xerez CD led to a vacancy in Segunda B, which was offered to and taken by the club.
Home is to the east of the city, close to the Rio Guadalquivir. The Ciudad Deportiva Rafael Gómez was first used by the club in 2006 and frankly, is nothing to get excited about. It is essentially a single open terrace holding 3,000 on the west side of the ground. There is one concession to the "Big-Time" however, as temporary seating has been added to the northern end, raising the capacity to 5,000. The club will however play matches at the Estadio Nuevo Arcángel and the Instituto Municipal de Deportes El Fontanar, which acted as home to Córdoba B from 1999 to 2006. 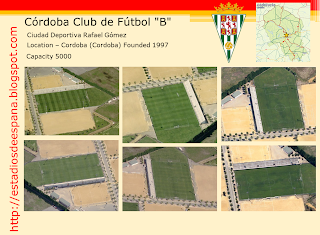