Set in the foothills of the Pyrenees and in the middle of La Garrotxa Volcanic Park, Olot is not your stereotypical location for Spanish regional football. This small town of 32,000 inhabitants has been home to Unió Esportiva Olot since 1921, and for much of it's history the club has laid dormant like the surrounding volcanoes. However, these past few seasons have witnessed a seismic upturn in UE Olot's fortunes, resulting in an eruption of local pride after the club sealed promotion to Segunda B for the first time in its history.
The first recorded instance of football being played in Olot is in 1902, when Joaquim Peris Vargas, commander of a battalion stationed in the town, set up a series of matches against locals and tourists. Move on a decade and two clubs, Olot Deportivo & Sport Club Olot were vying for the support of the locals, with the former staging a friendly match with FC Barcelona at their new enclosure on 15 September 1912. By the middle of the decade, both clubs had disappeared, but were replaced by Sporting Club and Renaixement Sportiu. These clubs merged in 1919 and used a new ground on Casal Marià which was to be known as the Camp de l'Estació. During the 1920's, UE Olot formed and alliance with RCD Espanyol, which would last until the 1960's. The final game of the 1939-40 season saw the club play its last game at the Camp de l'Estació, and victory over Figueres that sealed the regional championship. Now renamed UD Olot, they lost to FC Prat de Llobregat in the play offs, so remained in the regionalised second division.
UD Olot declined an invitation to join the Tercera in 1945 due to the additional cost of travelling such a move would bring. They eventually reached the Tercera division following reorganisation of the leagues in advance of the 1956-57 season. They were a regular feature of the Tercera for much of the 1960's, and also enjoyed prolonged stays during the 1980's & 1990's. There followed a period of decline that saw the club spend many seasons in the Primera Territorial, or seventh tier. Successive promotions from 2009-11 saw the club return to the Tercera and then build a team fit for promotion. The Catalan Tercera title was won in May 2013, but the first champions phase of the play-offs, saw UE Olot lose to Elche Ilicitano. With the defeated champions given another chance, Olot took their opportunity and disposed of Mairena & Arandina to earn promotion to Segunda B for the first time in the club's history.
Unlike the surrounding countryside, the Estadi Municipal d'Olot does not take ones breath away. It is a simple enclosure, with a 50 metre long cantilevered cover on the west terrace, that dates from 1958. Beneath this cover is the stadium's only seating, a raised section of around 50 seats for club officials. Four steps of terracing continue around the southern end, which has a simple narrow propped cover at its rear. The east side is made up of four steps of open terrace, whilst the northern end remains free from spectators, if not clutter. In the north west corner is the stadium's only modern building, a clubhouse and players changing rooms. With a capacity of just 3,000, the Estadi Municipal d'Olot is one of the smaller stadiums in Group III of Segunda B, but given the the club's recent form, who knows what heights it will scale next? 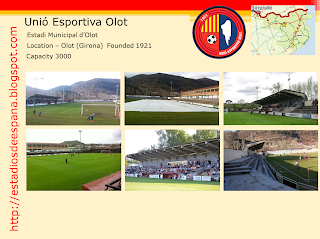