Club Deportivo Laudio de Fútbol San Rokezar, or CD Laudio to you and me, is the latest in a long line of small clubs from the Basque Region to try its luck in Segunda B. Like many of its predecessors, CD Laudio can trace its roots back to the first part of the 20th Century, when Euskadi was the industrial heart of Spain and football thrived thanks to the exploits of Athletic Club de Bilbao.
Formed on 16 July 1927 by Father Ignacio Valdés, Sociedad Deportiva Llodio was essentially a youth team who took their inspiration and club colours from Athletic. Their first home was the Campo de Las Maderas, which stood on private land next to the old Castejón-Bilbao railway line. Short of money, SD Llodio was evicted from the ground in 1934 dropped out of the regional league soon afterwards. The club returned to action in 1940, and helped financially by Villosa, a local glass company, they adopted the name Club Deportivo Villosa. The club was part of the Federación Guipuzcoana, but in 1945 applied and was admitted to Federación Vizcaína, which considerably cut the distance travelled to away games. The switch to the Federación Vizcaína coincided with the building of a new ground just down the line from Las Maderas. The Campo de Altzarrate opened on 16 September 1945 and thanks to the money from the glass company, it was one of the best regional stadiums in the Basque Country. Alzarrate had a grandstand seating 2,000 and standing space for a further 9,000 and was the springboard for a decade of success, which saw the club rise through the regional leagues, win the Basque Amateur Cup in 1953 and reach the Tercera in 1954.
Over the next two decades, and with the continued support Villosa, the club became a regular feature in the Tercera, finishing third in 1956-57 and successive fourth place finishes in 1966-68. The club also featured prominently in the Amatuer Championship of Spain, reaching the quarter Finals in 1969 & 1970. However, in 1972, Villosa decided to withdraw its sponsorship and sell the Campo de Altzarrate. The club re-adopted its old title of Sociedad Deportiva Llodio and set up temporary home in the heart of town at the Campo San Martin. The stay stretched out to five long years before the club moved to their present home of Ellakuri, in August 1978. The move did not bring about a rise in Llodio's fortunes as it continued its descent of the regional leagues. Such was the club's decline that in 1982, a rival club was formed in the town. Club Deportivo Salleko Lagunak was soon on a par with its older neighbours, and there began a prickly relationship that led to quarrels over the use of Ellakuri and the town's youth players. SD Llodio made a brief and unsuccessful return to the Tercera in 1996, finishing bottom with just four wins and twenty points to its name.
Although Laudio is the second largest town in Álava, it has a population of just 18,000. It was clear that the town could not support two senior teams, so in 2002, the clubs decided to bury the hatchet and merge. CD Llodio-Salleko was formed and within a year had earned a place in the Tercera. Over the past decade, the club has established itself in the fourth tier, changing to its current title in 2006. CD Llaudio finished runners-up to SD Amorebieta in 2010-11, but its first taste of the play-offs ended in disappointment at the hands of La Nucia. Its first Tercera title followed a year later, but the play-offs were its undoing once again with defeats to Ourense and San Fernando. Their second Tercera title was secured in 2012-13, and for a while it seemed that their play-off hoodoo had returned when they lost to Racing Ferrol. However, victories over Varea CD & Mar Menor CF earned the club its debut in Segunda B.
Ellakuri sits halfway up a picturesque valley about a kilometre to the north west of the centre of town. Both the main stand, which seats 500, and the covered Grada General date from 1978. By the time of its 2010 makeover, Ellakuri was beginning to look its age. The grey stands needed a lift and the original cinder track was full of weeds. The municipality installed red & white bucket seats in the main stand and new roofs were added. The Grada General got a lick of paint and a new blue synthetic running track was installed. All of which makes Ellakuri a pleasing mix of colour and quirkiness. Add to that the beauty of the surrounding countryside, and you will struggle to find a more picturesque location in Segunda B. 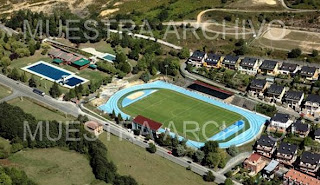 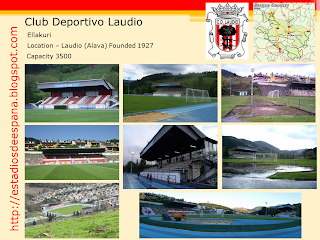