Time finally caught up with the old San Mamés. That cauldron of Basque pride was one of the greatest and most atmospheric stadiums the world game has seen. However, its idiosyncratic design belonged to another era and it no longer sat comfortably with the spectator, media and commercial demands of the modern game. Harsh, but undeniably true. However, following in the footsteps of a giant is not an easy task, which is made doubly difficult when that giant was a national and cultural icon. But that's the cross that Athletic Club de Bilbao's new stadium has to bear.

First talk of redeveloping or replacing San Mamés arose in the late 1990's, a period that witnessed the major urban regeneration of the central Bilbao area. Originally, a site for a new stadium was proposed on the southern bank of the Nevrion in the suburb of Abandoibarra, around a kilometre east of La Catedral. The local council rejected the proposal and at the turn of the millennium the site of the Trade Fair, which stood adjacent to San Mamés, was identified as a potential site. British architect Sir Norman Foster came up with plans for a 55,000 seat stadium, but these never left the drawing board, due principally to logistical problems. In 2003, Athletic Club president Javier Uria returned to the idea of a new stadium on the site of the Trade Fair and, in 2004, the club set up a committee to develop plans for the design and funding of the project. These plans were accepted by the Ayuntamiento de Bilbao in April of 2006 and in December of the same year, demolition of the old Trade Fair commenced. However, funding of the €211m build had yet to be formalised and there followed a period of financial haggling, not helped in any small part by the world financial crisis.

In March of 2007, architect César Azkarate of ACXT-IDOM, presented his plans for a 3-tiered 56,000 seat stadium that took much of its influence from the stadiums that had been developed for the 2006 World Cup, particularly those in Munich and Hamburg. The issues of financing were finally resolved with funding coming from five partners. Athletic Club, BBK (Bilbao Biscay Savings Bank), The Council of Bizkaya and The Basque Regional Government would have a €50m stake in the project, whilst Bilbao City Council committed €11m. Some local politicians called upon Athletic to make a greater contribution to the project, but Athletic remained resolute, reminding everybody of the stadium's community facilities and the €500,000 they will pay each year in rent. Work finally got under way on 26 May 2010, when the foundation stone was laid and work formally began a month later.
The site of the new stadium is sandwiched between the north west side of the fabled San Mamés stadium and the southern bank of the Rio Nevrion. As this land falls away sharply towards the river (a drop of some 8 metres), much of the initial work was spent on building up the foundations and retaining walls. By the autumn of 2012,  the lower tier of the stadium was in place... well, three sides were in place. You see, so close is the proximity of the new build to the site of the existing stadium that initially, only three sides will be developed. Despite valiant efforts, the new San Mamés was not ready for the start of the 2013-14 season, so Athletic played its first "home" match at arch rivals Real Sociedad's Anoeta stadium. The stadium finally opened on 16 September 2013 with an exhilarating league match with Celta Vigo, which Athletic won 3-2. Demolition of the old San Mamés commenced at the beginning of June 2013, and once the site has been cleared, the fourth side will be added during the 2013-14 season.
Throughout the project, the stadium has been referred to as San Mamés Barria, but on opening it was simply referred to as San Mamés. What will the new stadium look like? Well, Azkrate's original plans have been scaled back a little, with a few thousand seats dropping from the planned capacity. However, to begin with, the new stadium will hold just 36,600. Once the old San Mamés has been levelled, work will commence on the south-eastern end of the stadium. When complete, the new capacity will stand at 53,332. The lower tier will hold just over 20,000 spectators, the upper tier nearly 30,000, whilst sandwiched between will be a thin mezzanine level featuring 122 all-important private boxes and VIP seating for 3146. One of the conditions of the funding provided by the Basque Regional Government was the inclusion of community facilities. Spread over the five basement sections of the development are an indoor training arena for athletics track and field, a sports science facility and municipal sports centre. The new stadium will also feature office space, bars, retail outlets, a club shop and a club museum. A stone's throw and yet a world away from the old San Mamés.
Very few new buildings attain iconic status from the outset. Even the old San Mamés had to wait nearly 40 years before its world famous arch was constructed. Athletic's new home comes with all the comforts and mod-cons one expects of a modern stadium, but it has few distinguishing features. It's a sort of slightly smaller, hybrid version of Bayern Munich's Allianz Arena & Arsenal's Emirates Stadium, which in itself is no bad thing. However, there is one factor that will make the new San Mamés different, and it did not start out on some architect's drawing board. Athletics's fanatical support will ensure that from day one this arena has an unrivalled atmosphere, as they continue to defend the faith at the new cathedral. 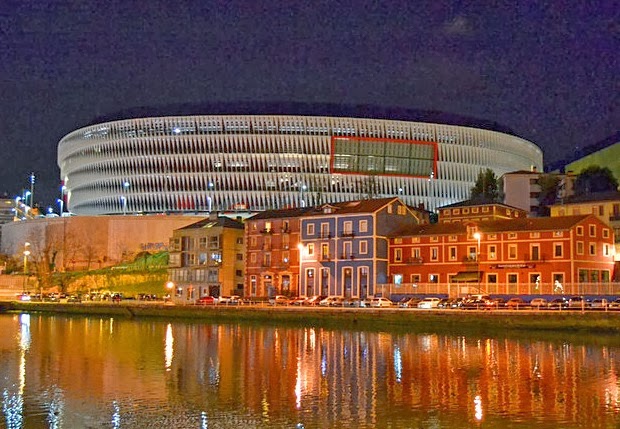 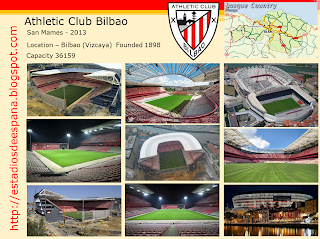 This article will be updated with new photographs and news as the build progresses.