On a grey Sunday afternoon 84 years ago, the Spanish Football League sprang into life. As you can imagine, things were done differently back then. There was no fanfare or orchestrated mass-media coverage to greet the start, just five fixtures that were scheduled to start at the same time (I know! How crazy is that?). The ten participating clubs were decided upon following a series of tortuous meetings, chaired by José Maria Atxa Larrea, the vice-president of Basque club and one time cup-winners, Arenas Club de Getxo. So protracted were these discussions and play-offs that were used to decide the final line-up, that this first 1928-29 season did not actually get under way until 10 February 1929. You can read about the first ever league season here. As you can imagine, the venues were not particularly sophisticated, but they had a charm and as they had evolved in a piecemeal manner, were unique. So here is my choice of the six best stadia that hosted matches during that inaugural season. 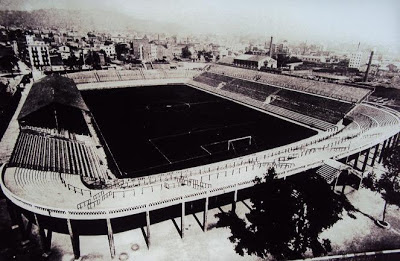 Barcelona's Camp de Les Corts opened on the 22 May 1922 when a Catalan XI beat the mighty Buddies (That's St Mirren to you and me) by two goals to one. The first league match saw Barça lose 1-2 to Real Madrid on 17 February 1929. Barcelona continued to develop Les Corts and by the early 1950's its capacity stood at 60,000. Not content with a stadium of this size, Barça played at Les Corts until April 1957, when they moved a kilometre to the west and the Camp Nou. The old stadium continued to host reserve team football before finally being demolished in the Spring of 1966. Read more about Les Corts & Barça's first five grounds here.
Metropolitano The Estadio Metropolitano had a difficult start to life as a stadium. It was inaugurated on 13 May 1923, when a crowd of 25,000 saw Atlético beat Real Sociedad by two goals to one. However, it was not universally popular to start with and over the course of the next 20 years, a series of disputes and the Civil War saw Atlético criss-cross across Madrid, before finally settling back at the Metropolitano in 1943. The first league match was  played on Sunday 17 February 1929, with the visitors Real Sociedad winning 0-3. The club finally called it a day in September 1966, moving south to the Estadio Vicente Calderon. You can read about the Metropolitano here.
San Mamés 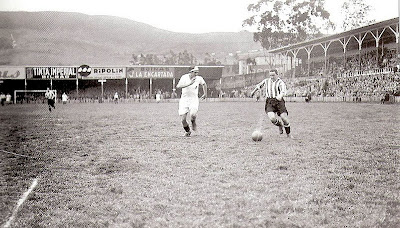 At a cost of 89,000 pesetas, San Mamés was the first major purpose-built stadium in Spain. The first match was held on 21 August 1913 when Cup-holders Racing de Irun were held to a 1-1 draw. By the time the league started, San Mamés capacity stood at 15,000 and it was full to the brim when it hosted its first league match on 17 February 1929 when Athletic beat Espanyol 9-0. 99 years of history came to an end at the end of May 2013, when La Catedral was replaced with a new place of worship. Read more here.
Chamartin 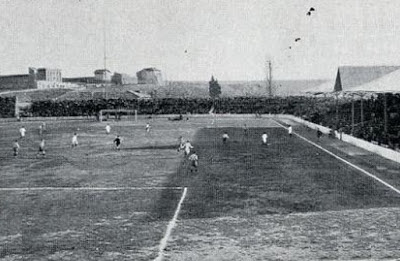 After a failed season-long relocation in the east of the city, Real Madrid moved to the Chamartin district in May 1924. Architect José Maria Castell was commissioned to design this 15,000 capacity stadium and he did not disappoint, coming up with a typical estadio inglés. As if to underline the very Englishness of the new arena, English cup-holders Newcastle United were invited to open the new stadium on 17 May 1924. On 10 February 1929, Real Madrid hosted Europa in the first league match played in Madrid, winning the fixture by 5 goals to nil. Practically destroyed during the Civil War, Chamartin was rebuilt with a 22,000 capacity, but made way in May 1946 for the building of the new Estadio Chamartin, or Estadio Santiago Bernabéu as it was to become in 1955. More on Chamartin here.
Sarriá 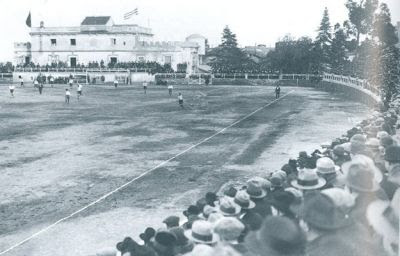 Espanyol had been playing matches at Barcelona's old Campo de la Calle Muntaner, when in 1922 they received some financial assistance from the wealthy La Riva Family. The textile industrialists bought some land on the Carre de Sarrià, close to Barça's Les Corts stadium, and funded the building of a new stadium. The ground was initially called Can Rabia, or White House, after an old villa that stood behind the southern goal. It was the stadium that saw the first goal in Spanish league football when "Pitus" Prats scored for the homesters in a 3-2 over Real Union. Espanyol continued to use Sarriá until June 1997, before heading off the the unpopular Olympic Stadium. Read more about this fantastic stadium here.
Atotxa 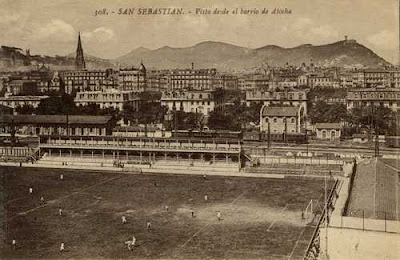 From the very start, Atotxa was shoe-horned between railway lines and business premises. By the end it was cramped, crumbling and hopelessly inadequate. It was also atmospheric, intimidating and above all, it was home. Opened on 4 October 1913 and inaugurated with a match against perennial rivals Athletic Bilbao. Athletic also provided the opposition on 10 February 1929, when they held their hosts to a 1-1 draw. Time was called on Atotxa in 22 June 1993. The stadium lingered on for a few more years, before being finally demolished in 1999. Quite possibly my favourite "Lost Stadium", you can read more on Atotxa here.

Four other clubs made up the line-up back in 1929, and you can read about the history of their homes by simply clicking on their names: - Racing Santander, Arenas Club de Getxo, Club Esportiu Europa & Real Unión Club de Irún.

Labels: Gone but not Forgotten, Six of the Best