A warm welcome to Jamie McGregor and his first article for the site. Jamie is an Asturian based Scottish blogger who writes for the excellent In Bed With Maradona & the Spanish based @CompartirPasion. His first article looks at one of Spain's first supporter-owned clubs (where he's a socio) and of course their stadium. This is the first of many articles by Jamie as he travels around the stadiums of Northern Spain. You can follow Jamie on Twitter - @jamiewmcgregor

Gijón is a city with a proud footballing history. El Molinón is Spain's oldest and one of its most famous grounds, but it's not the city's only stadium. The Estadio La Cruz can be found just a short walk away from the city centre in the neighbourhood of Ceares. The small ground is home to local side Unión Club Ceares whose motto “The last when it comes to money, the first when it comes to passion” is perhaps the most genuine of any club in the country.
Unión Club Ceares was founded in 1946 following the merger of Deportivo Blancoval and Fortuna Gijonés. Since the very beginning Ceares has been a lower league club and it currently plays its football in the Tercera. While it may not seem very prestigious, it is the highest level they have ever reached. Indeed with the current season being the tenth consecutive at this league, the last decade has been the golden age in the club's 67 year history. Glamorous and trophy laden, Ceares history is not. So what is it that makes this club and its stadium worthy of mention on this site? That’s easy as it's one of the only grounds in the country designed by the fans, for the fans. From the murals on the walls to the stadium bar to the toilet (more on that later), Estadio La Cruz is a vision of football as the property of the fans.
Ceares the neighbourhood is one of the more modest parts of Gijón. In fact, it used to be a small village on the outskirts until the rapid urban expansion swallowed it up. Interestingly, the football team didn't always play in the district, with the club's first home being in neighbourhood of Viesques. To those who know Gijón it will seem ironic that this radical club started off in a neighbourhood that is today one of its most affluent, but it's worth bearing in mind that Ceares wasn't always so radical. Actually, the most important event in Ceares' history occurred only two seasons ago when a group of supporters, inspired in large part by fans of FC United of Manchester, were successful in taking over the club and putting in place a fan orientated philosophy.
It's fair to say that British football culture plays an important role in the outlook of Ceares' fans and this can be seen and heard from the moment you enter the ground. The entrance is adorned with a sign reading Esto Ye La Cruz (This is La Cruz in Asturian). The walls around the ground are decorated with murals, many of which are in English and the biggest of which reads Against Modern Football. Most of the music played on match days originates from British punk bands and there are even a few chants with English.

La Cruz is a small ground capable of holding around 1,000 people with spectators having two options about where to watch the game. They can choose to sit in the small, all seated stand, behind the dugouts on the west side of the pitch. This has around 500 seats and dates from 2004. The other option is to stand on the small terracing behind the goal and next to the changing rooms. Regardless of where you watch the game, the focal point of the stadium is undoubtedly the bar. Open well before kick off until long after it, the club bar is an important source of income for Ceares. Decorated with scarves ranging from Borussia Dortmund to Stockport County, it's probably the most genuine football bar in Gijón. With so much beer consumed before, during and after the match, a toilet is a must and even here the stadium leaves an impression. The Mexiaeru (literally the pisser), is positioned behind the goal with a wall low enough as to allow you relieve yourself while watching the game!
Asturians, and Gijoneses in particular, are rightly proud of their footballing tradition. On the pitch they've given the Spanish game Quini, Juanele and David Villa to name just three. And now, off the pitch, they have UC Ceares, an example of what football in Spain could and should be like. 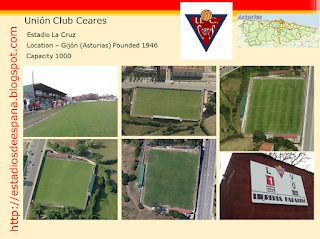