Pete Miles is a life-long Southend United supporter, which would usually exclude him from writing for this site! Luckily for us, he is mad about football stadiums and regularly watches matches across Europe. He recently paid a visit to the Basque Country and has written this great article on SD Zamudio, stalwarts of Tercera Group IV. They play at the Campo Gazituaga, which lies around a kilometre east of Bilbao airport. Take it away Pete...

Sociedad Deportivo Zamudio was formed in early 1943, the brainchild of the local mayor Mateo Romero. Vicente Rufino Perez Elcoro was elected as the club’s first president. SD Zamudio’s initial foray into organised football came in a local seven team tournament, the opposition comprising of the Zamudio Youth Club, Derio, Lujua, Munguia, Lezama, and an Elcoro Workshops team. The new team won a play-off against Zamudio Youth Club to win the tournament. The club entered the regional league for the 1943/44 season.
The club stayed steadfastly in regional competition until the 1994/95 season when they reached  the Tercera Division for the first time. This was Mariano Ruiz third campaign as coach of Zamudio and the current 2012/13 season is his 18th in charge of the team. It was a real achievement reaching the Tercera and that initial campaign saw Zamudio finish tenth. The club finished runners-up in their section of the Tercera the following season, and this time despite finishing behind RS Gimnástica in the play-offs, promotion to Segunda B was gained. Zamudio had a tough start winning only one of their opening eleven fixtures, a 2-0 success at SD Beasain. The team rallied towards the end of the season winning four and drawing one of their final six matches but even an impressive 5-0 away win at RS Gimnástica in the penultimate round proved futile as the team were too far behind the safety zone. The final match at home to Real Sociedad B was meaningless as both sides were down, the visitors taking the points in a narrow 1-2 victory. SD Zamudio finished 18th out of the 20 clubs and were accompanied in the drop by Real Sociedad B, Zalla UC and CD Logroñes B.
The following two seasons in the Tercera proved a real struggle for Zamudio finishing 15th and 19th respectively. A change of fortunate came with the turn of the century as more respectable finishes occurred, notably fifth places in both 2000/01 and 2004/05. The 2007/08 season saw a fourth place finish which secured a place in the play-off competition. However, Zamudio lost in the second eliminator to Sporting Gijón B. More recent seasons have seen mid table placing in Group 4 of the Tercera with the exception of 2010/11 when Zamudio slipped to 15th.
The club play at the picturesque Campo Gazituaga which was inaugurated on September 9th 1990 with a match against an Athletic Bilbao XI. The ground has a natural grass surface and the grandstand designed in the shape of a traditional Basque house has seating for 500 with dressing rooms behind and a bar to one side. This beautiful stand is set off nicely by a painted SD Zamudio badge as a centrepiece at the rear of the stand. There is a flat tarmac track around the pitch which does not appear to be in use and on the far side of the ground grass terracing has been eked into the banking and reinforced with wooden stakes. In the corner is a traditional manual scoreboard. 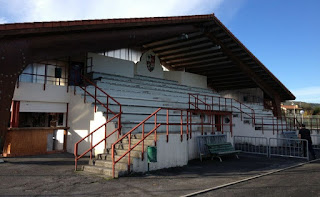 The club also has a 3G pitch with a small stand nearby which was remodelled and reopened in March 2003. It had previously been a sand and shale pitch called the Municipal San Martin. The new facility was christened the Campo Errekalde and plays host to the Zamudio’s youth and women’s teams. 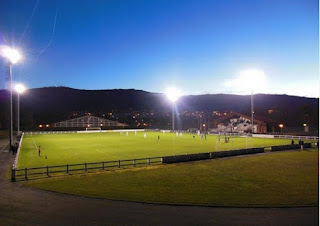 You can follow Pete on Twitter at @PeterRMiles and visit his great site, The Itinerant Football Watcher here. A big thanks to Pete for the article and for sharing his photographs. I'm already looking forward to his next visit to Spain.