Santa Cruz de La Palma is a city on the edge. On the edge of Europe, on the edge of a rain forest and so far as its football stadiums are concerned, on the edge of reason. You may already be aware of CD Mesanjero’s outrageously located Nuevo Estadio Silvestre Carrillo. Well you will be delighted to learn that their perennial cross-city rivals SD Tenisca, also reside in a stadium that has the most extravagant of locations. Before we take a look at the wonderfully named Estadio Virgen de Las Nieves, here’s some background on La Palma’s other club.
Sociedad Deportiva Tenisca was founded on Christmas Day 1922, which according to their records makes them the island’s oldest club. CD Mesanjero disputes this claim, the first of many disagreements that pepper the clubs relationship. What we do know is that the club was founded when some Catalan soldiers stationed on the island, organised a football tournament. The locals set up a team, choosing the name of Tenisca, who was a princess of the ancient inhabitants of La Palma, the Benahoarita. The club’s first colours were identical to Barça’s, a theme that continues to the current day with a second strip of red & blue stripes.
Tenisca’s first home was the Plaza de San Fernando, but a year later the club moved to the Campo Bajamar, which was situated on a the Esplanade, just south of the main port. The club dominated the early years of the island’s championship, however clubs from La Palma did not compete in the Canarias championship until 1964, by which time the club was a shadow of its former self. Tenisca was relegated to the regional leagues in 1968, but returned to the premier level a year later and here they stayed until the formation of the Canarias section of the Tercera in 1979. Here’s some footage of the Campo Bajamar in 1983. Tenisca left Bajamar in the late 1980's and moved to the Estadio Miraflores, an athletics stadium situated high above La Palma. The stadium was redeveloped when Tenisca left for their new stadium in 2001 and now goes by the name of Estadio Rosendo Hernández.
To say that Tenisca are stalwarts of the Tercera is an understatement. The club has clocked-up 34 consecutive seasons at this level, a record in Spain, but unlike Mensajero, has yet to break into Segunda B. (A point that no doubt grates!). That’s not to say they haven’t come close to promotion, having won the Tercera title twice and reached the play-offs on seven separate occasions. Alas, the play-offs have proved to be their Achilles heal, having never really come close to emulating their rivals achievement of life in Segunda B. Mesanjero’s remarkable feat may well have prompted Tenisca’s move from the Estadio Miraflores, for in 2001, the club headed north out of town to the village of Mirca.
The Estadio Virgen de Las Nieves opened its doors on 15 August 2001 with a friendly against UD Las Palmas, which ended in a 1-1 draw. Perched on a man-made plateau, the stadium and its adjacent training pitch hang high over the city, with uninterrupted views of the Atlantic Ocean, some 250 meters below. Its capacity of 5,500 is housed on three open banks of terracing-come-bench seating which are painted in the club’s colours of blue and white. The bulk of the seating is on the west side, which is cut into the hillside behind. Access to the stadium's changing facilities and offices is through a curious two-tiered corner stand of palcos, or VIP boxes,  which is linked to the narrow north terrace. A thin strip of benches run down the east side, before ending abruptly at the southern end, which is too narrow to house anything but the wall that stands above the artificial training pitch.
Given La Palma’s somewhat unpredictable climate, it is a little strange that neither Tenisca’s nor Mesenjaro’s stadium have any cover. What they do provide however, are two remarkable examples of how a small club can overcome the most extreme natural and physical constraints to create wonderfully unique stadia. 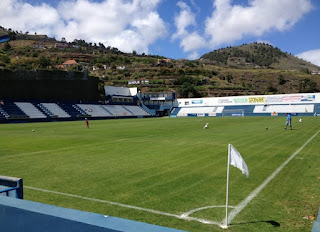 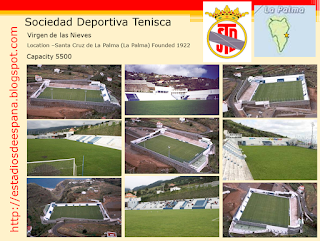