Here's the latest article from Pete Miles as he continues his tour of Spanish stadiums. This time we find him in the suburbs of Madrid and at a club who for one brief season, tasted life in La Segunda.

Club Deportivo Colonia Moscardó was officially formed on 23 July 1945 when it joined the Castellana Football Federation, although formative fixtures had occurred in the previous year. They currently play in the Tercera División (Group 7). The club initially started at the third tier of regional football and worked their way up to the third tier of National football for the 1964-65 season. The improvement in the club’s fortunes had coincided with the installation of Pedro Román Valero as the club’s president in 1958. The club had always sought to build a decent club in the Madrid suburbs of Usera and Colonia Moscardó. It is thought that the current site, later dedicated to Valero, was developed in his earliest years at the club to give the club a headquarters and achieve his ambition to act as a feeder club to the larger Madrid teams. It was during his early years in charge the club converted its kit from blue and maroon “Barcelona” colours to its current red and white stripes and blue shorts, not too dissimilar to a much larger club from the capital.
The clubs first tilt at national level football ended in a respectable 12th place and was followed by a strong challenge for promotion, with two second place finishes and a third in consecutive campaigns. Finally in the 1969/70 season, Moscardó won the Third Division, three points clear of CD Tenerife, and winning 24 of their 38 games. The Tercera consisted of just eight groups and the league winners met in the play-offs for the four available promotion places. Moscardó was paired with Catalans Terrassa, and after the two legs ended in 1-0 victories for the home teams, Moscardó eventually prevailed by 4 goals to one in the decisive third tie.

Their first and so far only, campaign at the second tier of Spanish football was a struggle for “The Flies” as they were relegated in last place, nine points adrift of safety having won only six matches all season. However, there was some tough opposition in the division for the debutants including the likes of Real Betis, Rayo Vallecano, Deportivo La Coruña and Real Mallorca. The club then steadied with twelve seasons in the Tercera División, mainly with mid-table finishes although the runners-up spot was achieved in the 1979/80 and 1980/81. The 1982/83 season, however, proved to be a disaster an 18th place finish seeing the club fall out of the national divisions for the first time in nearly 20 years. The decline coincided with Valero relinquishing the presidential reigns at the club. Moscardó returned to the Tercera (now the fourth tier) for the1985/86 campaign but could only muster a poor 19th place and immediate relegation.
The Flies bounced back from the regionals for the 1987/88 and finished as runners-up to CD Pegaso. This was only a prelude to a title win the following season when they won the league on goal average from CD Móstoles. However, promotion to Segunda B once again proved to be too much of a step up in standard for Moscardó and they went down straight away with Racing Club Ferrol, CD Lalin and Arosa SC, having finished in 18th place of the 20 teams. The club did however spend a further three seasons in Segunda B during the mid-1990’s.The turn of the century was not kind to the club and relegation from the Tercera ensued at the end of the 2000/01 campaign. Several seasons in the Madridlena Preferencia followed with one season spells back in the Tercera for the 2002/03 and 2005/06 season, both of which ended in relegation. Former President Valero who had maintained an interest in the club he built died in 2008 but the club rebuilt from this latest blow to return to the Tercera in 2010/11. Their first season back at the fourth tier ended in a creditable tenth place finish.
The Estadio Román Valero lies just south of the Rio Manzanarés and is adjacent to Usera metro station and has a decent capacity of 5,000. The main gates lead into the ground from behind the northern goal which has a sizeable terracing that sweeps round to the west side of the stadium. The terracing on this open side has a couple hundred plastic seats bolted to the concrete in front of the press box. As this terracing heads south, weeds creep through the steps, but with crowds numbering in the hundreds, nobody is in a rush to restore it. The east side of the enclosure has shallower terracing, although this affords shelter from the Madrid heat in the shape of a pitch length cover. This is made up of cantilever struts bolted to the boundary wall, with some corrugated sheets slung over the top. The southern end is undeveloped, but this was not always the case. During the stadium’s development in the late 1960’s, the open terrace extended around to the south side, taking the capacity to 15,000, but this area of the terrace fell into disrepair and was demolished in 2003. The first grass pitch was installed during the 1960’s, but this was replaced in 2007 with a 3G artificial surface. The Valero became something of a regular haunt for English rock bands in the 1980’s with The Police, Dire Straits, Iron Maiden, Black Sabbath, The Cure and Def Leppard all playing live shows at the stadium. Bob Marley and Santana have also played at the Román Valero. 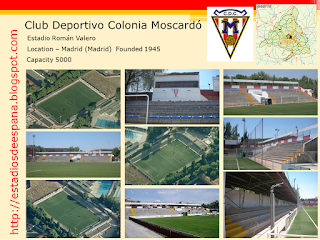 You can follow Pete on Twitter at @PeterRMiles and visit his great site, The Itinerant Football Watcher here. A big thanks to Pete for the article and for sharing his photographs.