Now we all know that a pretty name does not maketh a location (Take Welwyn Garden City for example!). However El Puerto de Santa Maria does deliver on both counts. Not only does it have an idyllic moniker, it simply oozes with culture and history. Throw in some of the best beaches on the bay of Cádiz, the crazy spring fair and the sherry, plenty of sherry, and you have one hell of a town. It also has one of the most striking single stands in the south of Spain, which is rather convenient given the content of this website.
More on the stadium later, but first here is a potted history of Racing Club Portuense, who were the town's resident club. Formed in 1928 following the merger of two junior clubs Chicoluero & Competidor, Racing's first home was on the Plaza Polvorista. There followed moves to the Campo de Baños Termales in 1931 and the Campo Tiro de Pichon in 1934, by which time the club had joined the Andalucia federation and started to play in the regional leagues. A further move followed in 1940, when Racing set up home in its first properly enclosed stadium. The Campo de Eduardo Dato was named in a fit of post-Civil War posturing after the Spanish Prime Minister who was assassinated in 1921 by Catalan anarchists. It was a simple affair with four narrow terraces, a capacity of 2,500, and stood on the corner of Avenida de la Constitución and Avenida de Andalucia. It remained home for the next three decades, witnessing Racing's promotion to the Tercera in 1954 and their first title in 1967-68. That season, the club came within 90 minutes of La Segunda, losing the home leg of their play-off final to Deportivo Alavés 0-2. Time was called on the Campo de Eduardo Dato in May 1972, and Racing headed east across the Rio Guadalete to a new and altogether more impressive arena.
Work started on the new stadium in the spring of 1971. It was named after the former president and main benefactor of Racing and featured three open sides and a sleek 60 metre modern stand, with a deep cantilevered roof on the west side. The new stadium was inaugurated on 20 August 1972, when a capacity crowd of 10,000 watched the locals take on Real Madrid in a friendly. The new surroundings did not have an immediate impact on the form of the club and it took the reorganisation of the leagues in 1977 for Racing to gain entry into the newly formed Segunda B.  Racing graced the third tier for the next seven seasons, finishing as high as third in 1979-80. Relegation in 1984 led to seven seasons in the Tercera, before a return to Segunda B was secured in 1991. However, Racing was beset with financial problems, folding soon after the start of the 92-93 season, which led to their demotion to the regional leagues. The club returned to Segunda B in recent times, finishing third in 2006-07 before losing out to Rayo Vallecano in the play-offs. They dropped to the Tercera in 2009, before folding in August 2013.
The Estadio José del Cuvillo sits just outside of town and is reached by crossing the main bridge to the east and a short walk along the the bank of the Guadalete. Little has changed since the stadium opened forty years ago, however the main stand scrubbed up well when it was given a make-over prior to Racing's last promotion to Segunda B in 2006. This involved re-facing the dramatic cantilevered roof (removing the giant sherry advert!) and installing bands of red & white bucket seats on the deck below. The delicate lattice work that fills the voids between the roof and the cantilevered supports was also beautifully restored. The additional seating reduced the overall capacity to 8,600, of which 1460 are seated in the main stand. Whilst Racing may have gone to the football league in the sky, you would struggle to find a more picturesque location than El Puerto de Santa Maria in this corner of Spain. 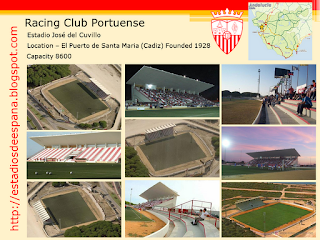