It may come as a surprise to many, but Madrid was absent from the birth of Spanish football. The city did not take on its current fatherly duties until the foundation of the RFEF in 1909. With no significant British community in Madrid in the late 1890’s, the formation of football clubs in the Spanish capital was left to the usual suspects, middle-class students from schools with overseas ties. One such team to emerge was Sky Foot-ball Club, who can rightly claim to have played a part in the formation of one of the world’s most illustrious sporting institutions. A club that now occupies more stellar surroundings – Real Madrid Club de Fútbol.
Sky Foot-ball Club was formed in 1897 by students at the La Institución Libre de Enseñanza. The club played on wasteland in the area of Moncloa but within two years, a faction led by Catalan brothers Giralt and Juan Palacios had broken away to form Madrid Foot-ball Club. Madrid’s first pitch was a square of land on the corner of Calle Valázquez and Calle José Ortega y Gasset, which they named the Campo de Estrada, after the marble merchant that owned the plot. Those early games were unofficial, friendly affairs but on 6 March 1902 it established its first constitution, the date which the modern day club recognise as their formation. Textile merchants Juan and Carlos Padrós ploughed money into the club which coincided with a move, a few streets to the south east, on to land next to the city’s old bullring. This enclosure went by the rather unimaginative name of Campo de la Avenida de la Plaza de Toros and was part-owned by Queen Maria Cristina, to whom the club played an annual rent of 150 pesetas. What was officially a land-fill site was soon transformed into a level, roped-off dirt pitch with changing facilities at an adjoining tavern called La Taurina.
Madrid FC continued to play at the Campo de la Avenida de la Plaza de Toros over the next decade, although there are contemporary reports of some matches being played in front of the main grandstand at Madrid’s hippodrome. The club soon started to attract the best players from Madrid’s other amateur clubs and in 1903 reached the final of the first Copa del Rey, losing 3-2 to Athletic Club at Madrid’s hippodrome. After failing to reach the final stages in 1904, the club returned to the finals in 1905 and secured its first national trophy, beating Athletic Club and San Sebastián Recreation Club in a round robin tournament. This was the first of four consecutive victories in the Copa del Rey, including the 1908 victory at their home ground, which established Madrid as Spain’s top side. With football growing in popularity in the Spanish capital, Madrid FC outgrew their home next to the bullring and from 1910 started to occasionally use a pitch on the corner of Calle O’Donnel & Calle de Narváez.
This was only slightly better than the Plaza de Toros site, but in 1912 the club fully enclosed the ground and added a wooden fence around the dirt pitch. It was officially inaugurated on 31 October 1912 with a match against Sporting de Irun, which finished one a-piece. Madrid FC rented the stadium for 1,000 pesetas per annum from Laureano Camisón and spent 6,000 pesetas of their own money in 1914, when they built a short covered stand that housed 216 spectators. The Campo de O’Donnell with its capacity of 5,000, was now the best stadium in Madrid, but as significant was the fact that among the volunteers that had helped with the build was one Santiago Bernabéu.
It was at the Campo de O’Donnell where Bernabéu would make his name playing as an inside forward, however the success of the club’s early years proved to be more elusive. The formation of clubs such as Unión Sporting Club and Racing Club de Madrid diluted Madrid’s pool of talent and it took another five years for Madrid to win another national trophy. This came in a replayed final of the Copa del Rey at the Camp de Carrer de Muntaner in Barcelona, where Arenas Club de Getxo were eventually defeated 2-1. A year later, Madrid FC returned to the final which was staged at their Campo de O’Donnell, but a side that featured Santiago Bernabéu lost 0-2 to Real Union de Irun. In June 1920, the club sought and was granted royal patronage, thus becoming Real Madrid, but time was running out at the Campo de O’Donnell, as the owner wanted to develop the land. Pressed into finding a quick solution, the club opted to move out of town to a newly built velodrome in the eastern suburb of Ciudad Lineal.

The Velodrome was owned by Arturo Soria who charged the club 1,500 pesetas per annum to use the 8,000 capacity arena. The stadium was full to capacity when Real Madrid beat Real Union 2-0 in their first match at the new ground on 29 April 1923. The stadium’s principle use was for cycling which meant that the spectators behind the goal were perched high on a bank, some 30 meters from the nearest action. It did however have a grass pitch, Real Madrid’s first and the suburb of Ciudad Lineal was reasonably well served by tram links. However the trek across town proved too tiresome for the majority of the club’s support and after a mere 12 months at the venue, the club moved to a more central location. The velodrome was purchased by the Plus Ultra insurance group in 1943, whose senior team eventually became Real Madrid’s reserve section in the 1950’s.

Real Madrid was not content with renting and having purchased land in the northern Chamartin district of town, set about building a stadium. Architect José Maria Castell was commissioned to design a 15,000 capacity stadium and he did not disappoint, coming up with a typical estadio inglés. It featured three open banks of terracing and one covered grandstand, which held 4,000 and had a central pointed gable on its pitched roof. The Campo de Chamartin would not have looked out of place next to the great designs of Britain’s leading stadium architect Archibald Leitch. As if to underline the very Britishness of the new arena, English cup-holders Newcastle United were invited to open the new stadium on 17 May 1924, and a sell-out crowd watched the locals prevail, winning 3-2 with Real Madrid’s Félix Pérez scoring the first goal at Chamartin.

The new stadium did not herald a new era of Real Madrid dominance. That would have to wait until the beginning of the 1930’s when, following the arrival of talismanic goalkeeper Ricardo Zamora from Español, the club won back-to-back league titles, the first of which in 1931-32, saw the club remain unbeaten throughout the campaign. Victory in the Copa del Rey followed in 1934, and a further appearance in the final came in 1936. However, with the clouds of Civil War gathering, the league was suspended. Real Madrid made attempts to join the Catalan Championship, but these were thwarted by Barcelona, so the club was effectively mothballed during the hostilities, which is more than can be said for the Campo de Chamartin. The stadium was initially used by the Republican forces for political rallies and sports events, but  as the front-line closed in, the main stand was broken up for fuel and the terracing and pitch all but destroyed. In the immediate aftermath of the war, what remained of the enclosure was used as a detention centre for political prisoners. It took six months and 300,000 pesetas to restore the ground before football could resume on 22 October 1939, when Real Madrid beat Atlético Aviación by 2 goals to one in front of an increased capacity of 22,000.
The years following the Civil War were a barren period, but in 1943 Santiago Bernabéu began his reign as club president. Since retiring as a player, Bernabéu had become a lawyer, but had also coached and served the club as secretary. One of his first acts was the purchase of 5 hectares between the Campo de Chamartin and the Castellana, the main thoroughfare to the north of the city. It cost a mammoth 3 million pesetas, but Bernabéu had a plan for Spain’s first super stadium, and broke the first ground himself in October 1944. On this site, at a staggering cost of 38 million pesetas, Real Madrid would build the new Estadio Chamartin. Such was the close proximity of the new stadium that the north-west corner of the existing stand encroached onto the east side of the new build. This meant that the club had to vacate the Campo de Chamartin so that work could be completed on the new arena. Real Madrid played their final game at the old Chamartin on 15 May 1946, a 4-5 defeat to CD Málaga, before spending just over a year as guests of Atléti at the Estadio Metropolitano.

The Campo de Chamartin was raised to the ground during the summer of 1946, just as the first trophy of the Bernabéu era had been secured with a 3-1 victory over Valencia in the Copa de Generalisimo. No trace of the old stadium remained when the Nuevo Estadio Chamartin opened its doors for the first time on 14 December 1947. As we now know, Santiago Bernabéu's gamble proved to be an inspired move. 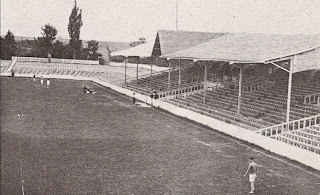 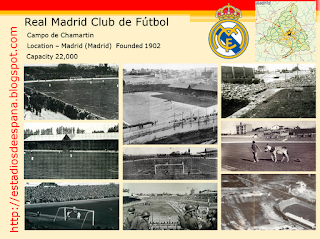