Given their financial woes and general air of uncertainty, it came as a bit of a surprise to learn that Racing Santander has stomped up 190.000€ for a place in Segunda B for its reserve side. When you consider the lack of action in assembling a first team squad, you can't help but feel that it's money down the drain should the first XI slip another division in May 2013. But that's enough of this doom-mongering, what of Racing Santander B and their home?
The history of Racing Reserves is, like so many teams in Spain, intertwined with a smaller, affiliated club. The club in question here is Rayo Cantabria, who was founded in 1926 as Rayo Sport in the Alto de Miranda district of Santander. The club played most of its football in the Tercera, but in 1959 came within a match of La Segunda, but lost out to SD Eibar in the play-offs. Following the restructuring of the league in the late 1980's, Rayo won promotion to Segunda B after winning the Cantabrian Tercera title in 1986-87. Unfortunately, their one and only season at this level ended in relegation with a total of just seven wins and nine draws in the 38 game season. The club shared the first team's old El Sardinero stadium up until 1988, when it moved just to the west of the city to Racing's new training complex, La Albericia. Up until 1993, Rayo acted as a subsidiary of Racing Santander, but this was to change when the Spanish Federation ruled that all affiliated teams must become assimilated into the professional club. So Rayo was reformed as Sociedad Deportiva Rayo Cantabria and Racing Santander set up its own reserve team, Real Racing B. You can read more about Rayo Cantabria here.
Real Racing B took up where Rayo had left off, doing well in the Tercera, but unable to navigate their way through the end of season play-offs. That changed in 1996-97 when promotion to Segunda B was earned thanks to their topping of a play-off group that featured CD Binéfar, Deportivo Alavés “B” and Club Haro Deportivo. Regrettably, their visit to the third tier was short and a 17th place finish saw the club relegated at the end of the season. Two years later and Racing B repeated the trick and spent another season in Segunda B, finishing 17th once again. In all, Racing B have been regular visitors to the third tier over the past decade, but have never managed a stay in excess of two seasons. Their best finish of 8th was achieved in 2005-06, but since 2010, life has been spent in the Tercera. The 2012-13 season will see the club return to Segunda B following the demotion of five teams and the payment of that 190.000€ bond to the RFEF.
The club's training grounds at La Albericia underwent extensive rebuilding in 2009 and as a result, Racing B moved their home matches to La Maruca, a municipal athletics stadium to the south of the city, near the airport. Their sabbatical ended in August 2011 when La Albericia re-opened, and quite an impressive complex it is too, in a small and understated sort of way. Comprising of two natural pitches and two artificial surfaces, the main facilities are contained within a new three storey building that occupies the south west corner of the site. This hub houses club offices, gymnasium, treatment rooms, TV & Media centre, changing facilities and residential space for 18 of the club's young professionals. It also houses the complexes only spectator accommodation. The entire north side of the building is made up of a 600 seat tribuna that sits directly behind the southern goal of Racing B's main pitch. This sleek stand offers excellent views of the main arena and blends seamlessly into the profile of this modern facility.  Does 600 seats offer enough in the way of accommodation? Well for the majority of time it does, but on the rare occasions that Racing B require a more space, the main Estadio El Sardinero is but a short jaunt back into town. 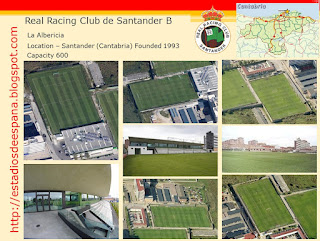