It was no surprise when the RFEF selected the iconic Estadio Santiago Bernabéu to stage the final of the 1982 World Cup. For nearly 35 years, the home of Real Madrid had played host to some of the world's greatest players and most important matches, and now it was about to stage the ultimate game in world football. The building of the Bernabéu in 1947 heralded a new age in European stadium design, but 30 odd years later it was in need of a major overhaul. 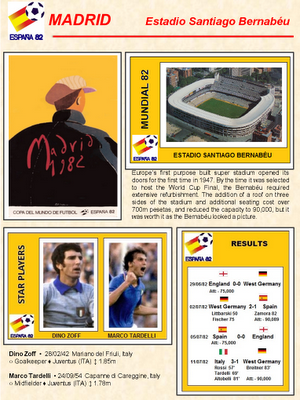 THE ESTADIO SANTIAGO BERNABÉU
The open tiers of this once graceful stadium were now in need of major surgery and this was to come at a cost of 700 million pesetas, with Real footing three quarters of the bill. The re-fit included the installation of more seats which reduced the capacity to 90,000, the addition of a 150 metre long footbridge to a temporary media centre and re-facing & strengthening the façade of the ground, in order to support a new cantilevered roof that would cover three sides of the stadium. The new roof snapped tightly on to the stadium’s bowl, like a Tupperware lid and its streamlined curves certainly added a pleasing modern symmetry to the stadium. It was nonetheless a major piece of construction, accounting for half of the overall cost. Using lightweight fibre-mix cement and acres of fibreglass panels, it swept around to meet the open, but still majestic east anfiteatro. High, behind each goal, the roof fascia appeared to morph, so that video screens, the first in any stadium, could be accommodated. The new remodelled Bernabéu saw its first official match when Real took on the USSR in February 1982. In total, the stadium hosted four matches at the finals. They were three second round ties featuring Spain, West Germany & England, and the final itself, where Italy took on the returning Germans. You can read more about Real Madrid and the Bernabéu here.
WEST GERMANY vs ENGLAND - GAME 1 GROUP B

The first match at the Bernabéu during España 82 was a drab, boring affair between two sides that had often produced spectacular matches. The Germans were ultra cautious and England lacked any creativity. West Germany nearly snatched a winner in the dying minutes when Rummenigge struck the bar with a shot from distance.

Spain's disappointing tournament came to an end with defeat at the hands of West Germany. Breitner played a superb game and Germany were frustrated by the keeping of Arconada. They eventually took the lead when Littbarski scored a simple chance after Arconada spilled a shot. Fischer doubled the Germans lead and whilst Zamora scored late on, it was West Germany who had one foot in the semi-final and Spain who had both feet in the grave.

ENGLAND vs SPAIN - GAME 3 GROUP B

England knew that they had to beat Spain by two clear goals, but lacked a cutting edge throughout. With half an hour to go, the barely fit Keegan & Brooking entered the fray, and both missed easy chances. That was it. England were out and West Germany headed to Sevilla for a semi-final with France.

ITALY vs GERMANY - WORLD CUP FINAL
And so to the final. Both teams had experienced a chequered tournament, but it was the Italians who were in the ascendancy and were favourites to lift a third World Cup. It is easy to forget the number of setbacks that the Italians suffered prior to and at the start of the match. Missing Antognoni through injury, they lost Graziani with a shoulder injury on 8 minutes. To make matters worse, Cabrini became the first man to miss a penalty in a World Cup Final on 25 minutes. However, Italy showed great resolve and took the lead when Rossi stooped to head home just before the hour. Tardelli doubled the lead on 68 minutes - cue his memorable and ecstatic celebration. Altobelli sealed the win 9 minutes from time, and whilst Breitner scored a consolation two minutes later, it was Italy's crown. Dino Zoff lifted the trophy and in doing so became the competition's oldest ever winner at the age of 40.