The second stadium in Barcelona to host games at the 1982 World Cup was RCD Espanyol's old Estadi de Sarriá. This compact and atmospheric stadium stood barely a mile to the east of Barcelona's Camp Nou and whilst it and Espanyol were almost perpetually in Barça's shadow, for a few days in July 1982, Sarriá shone like a beacon. The stadium was the perfect setting for three intriguing matches featuring Argentina, Brazil and Italy, with the final and deciding match between the latter two, going down in history and probably the greatest match ever played at the finals. 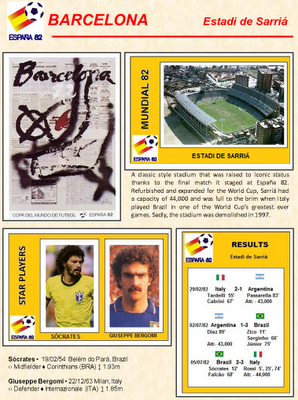 THE ESTADI DE SARRIÁ
Espanyol moved to Sarriá in 1923, in a plan to create direct opposition to Barcelona who had moved into their Les Corts stadium a year earlier. The stadiums stood less than 600 metres apart, but it was clear from the outset that Barça was where the money and the trophies were heading. Sarriá remained a fairly basic, open ground for its first 50 seasons, but then in 1974, the east side was developed when an all-seated covered stand was erected. The construction was unusual in that the upper deck of the stand stood on stilts, high above a wide and fairly flat paddock. Then in the lead up to the 1982 World Cup, 413 million pesetas were splashed out on redeveloping the ground and its infrastructure. This included constructing and seating a new paddock area in front of the east  stand, the building of new corner terraces, improved media facilities and new floodlights. This raised the capacity to 44,000. Sarriá had to wait for over two weeks after the tournament had started to host a game, but boy, was it worth the wait. You can read more about this fantastic stadium that was eventually demolished in 1997, here.
ITALY vs ARGENTINA - GAME 1 GROUP C

This was a meeting of two misfiring teams that the media had down as cannon-fodder for the all-conquering Brazilians. Well, the experts were right about Argentina, who had gone backwards from four years earlier. Too much was expected of Maradona , who was expertly marshaled by Claudio Gentile throughout. Italy were finding their gears whilst Argentina was stuck in reverse.

This all-South American affair was a one sided precession for Brazil. I mean, even Serginho scored! Zico opened the scoring in the eleventh minute, prodding home after Eder's free-kick had crashed against the Argentine bar. Junior added a third, and as Argentina headed home, thoughts turned to the group decider in three days time.

Why bother with words when the pictures do all the talking. Suffice to say that this was, in my honest opinion, (oh alright!... slightly biased opinion) the greatest game the tournament has ever staged. Sit back and enjoy.