It’s 1900 and the new-fangled craze of foot-ball is starting to take a grip on mainland Spain, but not in far-off Lanzarote. 25 years later and the islands of Gran Canaria, Tenerife and La Palma have established football clubs, but not Lanzarote. By the middle of the 20th century, clubs from the Canary Islands are competing in the national leagues, but Lanzarote is still struggling to field a decent representative team in the Campionate de Canarias. Quite why mainstream football passed the island by is a bit of a mystery, but by the late 1960’s, despite numerous youth teams and occasional forays in senior football, the island was still a footballing backwater. The island needed a focal point and that was provided in 1968 with the building of the Estadio Avendaño Porrúa.
There had been rudimentary stadiums in and around Arrecife from the mid 1920’s, such as the Campo Salinas, Campo La Vega and the rather optimistically named Estadio Olimpico. The latter was damaged by severe flooding in 1959 and five years later, the Civil Govenor of Las Palmas visited the island and announced that a new stadium would be built to the north of the old town. The Estadio Avendaño Porrúa featured a long open terrace on the east side of the stadium, and another open terrace behind the north goal.The west side featured changing facilities, radio booths and not a lot else. Given the islands arid climate, the stadium could not support a natural grass pitch, so the island’s volcanic soil was compacted to produce a playing surface. The shape of the enclosure was oval and a six-lane athletics track ran around the pitch. Even then, this new facility did not inspire Lanzarote’s senior teams, so in 1970 the local football authorities raised the idea of forming a team that would represent the island. In July 1970, Unión Deportiva Lanzorote was founded by pooling the best players from the island’s senior  clubs.
The new club started out in the second division of the regional provincial league, reaching the regional Tercera in 1980. Here it remained for the next nine seasons, rarely troubling either end of the table, before dropping to the Regional Preferente in 1989. UD Lanzarote struggled to establish itself during much of the 1990’s but towards the end of the decade, they reached the Tercera play-offs. Here, at their second attempt, they won promotion to Segunda B, outplaying  UD Telde, UD Orotava & UD Las Palmas B, despite finishing below them in the regular season. Their first visit to the third tier was short lived, finishing 17th, but with the nucleus of a good team UD Lanzarote won its first Tercera title and stormed the play-offs on its way back to Segunda B. There followed nine uninterrupted seasons at this level, the highlights being a third place finish in 02-03 and the Segunda B Grp IV title a year later. However, UD Lanzarote fell foul of the play-off system, finishing bottom of their group on both occasions. The club’s stay in Segunda B ended in rather ignominious fashion when they finished the 2009-10 season in last place, some ten points from safety. Two reasonable attempts at a return were made, with a second Tercera title earned in 2010-11, but with budgets slashed, the club’s focus has turned to the opposite end of Tercera Group XII.
The Estadio Avendaño Porrúa became the Estadio Ciudad Deportiva in 1986, but little changed to the structures, although an artificial pitch and synthetic running track was added in the late 1980's. The ground was still open to the elements when UD Lanzarote made its first appearance in Segunda B, but that was usually a problem with sun due to the proliferation of midday kick-offs. Thanks to the club's excellent runs in the Copa del Rey in the early part of this century, several La Liga clubs have paid the stadium a visit, with Tenerife, Athletic Bilbao & Mallorca sent packing with defeats. Perhaps the most memorable night at the stadium however, was when Real Madrid paid a visit on 28 November 2001. Los Rojillos held a team featuring Figo & Zidane well into the second half, before Los Blancos ran out 1-3 winners. A propped cover was eventually added over the east side in 2005. This rather baulky roof runs the length of the playing surface and hangs low over a few hundred red & blue bucket seats and the painted green steps-come-benches. The stadium staged Segunda B football on every weekend of the 2006-07 season when Club Deportivo Orientación Marítima, also from Arrecife, gained promotion and switched home matches to the venue.
Now confined to the lower reaches of the Tercera, UD Lanzarote seem miles away from the heady days of a decade ago. History would suggest that the club has returned to its natural level and judging by the facilities on show, so has the Ciudad Deportiva. 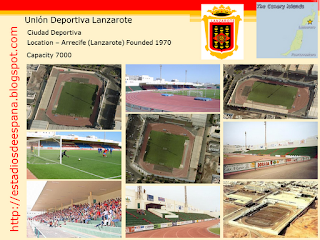