The World Cup was never going to pass on Spain's third biggest city, but the city's main stadium and the home of Valencia Club de Fútbol needed a considerable refit. There was a  problem however, for the Estadio Luis Casanova was hemmed in on three sides, so any expansion upwards was out of the question. Fortunately, the club & the architects had an ingenious answer that would see the seating capacity increased and the national team select the stadium as its base for the group games at España 82. 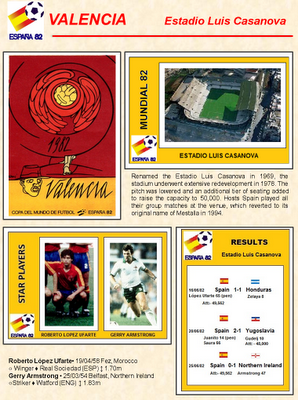 ESTADIO LUIS CASANOVA
The stadium opened in 1923 under its original name of Mestalla, but was renamed in 1969 in honour of the club president. Work started on the redevelopment for the World Cup in 1978, when architects Salvador and Manuel Pascual came up with a brilliant idea to increase the seating capacity. As the stadium could not expand outwards or upwards due to the close proximity of the neighbouring buildings, the pitch was excavated in order to build a new lower tier. The first few rows of all the existing stands were also removed and in its place, several metres lower, went 20 rows seats. The base of the existing stands were then extended using cantilevered struts, so that they overhung the back 10 rows of the new lower tier. This mammoth operation bought its reward, as La Selección played their first three matches in front of a packed Estadio Luis Casanova. With additional seating added to other areas of the stadium, the capacity remained at 50,000, but with 33,053 seats.

SPAIN vs HONDURAS - GAME 1 GROUP V
Spain entered the tournament as third favourites to lift the trophy, but the team simply could not handle the immense pressure of playing in front of a hugely expectant crowd. Honduras started brightly and Zelaya scored in the seventh minute, finishing off a neat move by sliding the ball past Arconada. Spain trailed for an hour before López-Ufarte slotted home a penalty kick to spare the players, the crowd and the nations blushes.

SPAIN vs YUGOSLAVIA - GAME 3 GROUP V
Yugoslavia was highlighted as Spain's main opponent in Group V and La Selección's concerns came home to roost when Gudelj scored with a diving header in the tenth minute. Spain's route back into the game was controversial, as Danish referee Lund-Sorensen  awarded a penalty for a foul on Alonso that was a good yard outside the area. López-Ufarte missed with his kick, but the referee ordered the kick to be re-taken and this time Juanito made no mistake. Spain's winner came from substitute Saura, who scrambled the ball in from a corner in the 66th minute.

SPAIN vs NORTHERN IRELAND - GAME 6 GROUP V
Northern Ireland needed to win to make sure of qualification to the next round, whilst Spain could afford a defeat, but only by a single goal. Once again the pressure of being the home nation weighed heavily on the Spanish, who struggled to produce any fluid play in an often physical game. The pressure increased after 47 minutes when Gerry Armstrong scored the most famous goal in his country's history. Spain grew more hesitant as they knew that one more slip would see their tournament end. Mal Donaghy was sent-off with 30 minutes to play, but Northern  Ireland and particularly Pat Jennings, stood firm as both sides progressed to the second round.