Thirty years ago, on a sultry afternoon in Barcelona, the nation of Spain welcomed the world to the biggest football party on the planet. The Catalan capital was an obvious choice as a host city, given its size, cultural & political importance and sporting heritage. Madrid's Estadio Santiago Bernabéu was chosen by the tournament organisers to host the final of the World Cup, but parity was restored when the Camp Nou in Barcelona was selected to host the opening ceremony and first match of the tournament. Below is the first page of our "sticker album" that looks at the stadium, the stars and the matches played during España 82. 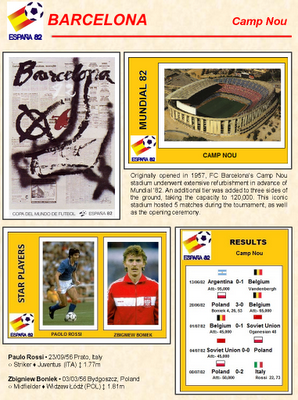 Now I'm not a big fan of any form of opening ceremony, but if lots of children waving balloons and oversized mannequins is your sort of thing, then here is some video footage.


CAMP NOU
Barcelona's Camp Nou was well into its third decade when work began in 1980 on extending the capacity for the World Cup.  As well as the opening match at Mundial '82, the stadium hosted three second round matches and a semi-final. The reconstruction project saw an additional third tier added to the three uncovered sides of the stadium, along with new scoreboards and floodlights. This work raised the capacity to 120,000, but came at a cost of 1,298 million pesetas. Not that Barça was complaining, for they had increased the size of the stadium and for once it didn't dent the club coffers. Whilst the majority of the the funding for the redevelopment came from central government, Barcelona did dip into their own pockets to build the Mini Estadi, some 250 metres to the west of the stadium, which opened in the September following the tournament. A crowd of 95,000 watched Argentina take on Belgium in the first match, and this was the highest attendance for any of the matches staged at the Camp Nou. Your can read more about Camp Nou here.
ARGENTINA VS BELGIUM - GAME 1 GROUP III

The opening games of the four previous tournaments had ended in scoreless draws, but at least this match brought an end to that unwanted record. Admittedly, it was just the one goal, but it was enough to end the sequence of goalless draws in the curtain-raiser. Belgium was making its first appearance since 1970, whilst holders Argentina had pretty much the same squad from four years previous. There was however one very noticeable addition to the Argentina team, the new superstar of world football, Diego Maradona. He was making his World Cup debut on the ground that would become his new home at the end of the tournament. Argentina started the match strongly, but Belgium's mass defence kept scoring opportunities to a minimum. Then just after the hour, the unmarked Vandenbergh collected a long cross-field pass and shot home from 12 yards. Belgium held on with little alarm, as Argentina became the first defending champions to lose their opening game since Italy in 1950.

POLAND VS BELGIUM - GAME 1 GROUP A

It had taken Poland a few games to get going, but after beating Peru in the final group match, they continued their good form with a Zbigniew Boniek-inspired victory over Belgium. Boniek, who had just agreed terms with Juventus, turned in a virtuoso performance, scoring a hat-trick against a lacklustre Belgium side, who were missing several key players due to injury and suspension.

Belgium made further changes in a desperate attempt to remain in the tournament. Whilst they produced a better performance than in the previous match, their inability to score goals proved costly. The games only goal was scored by Oganesyan four minutes after half-time, which set up a winner-takes-all tie for the Soviets with Poland.

A solid defensive display and early profligacy from the Soviet Union, saw Poland get the draw  it needed to qualify for the semi-finals. In fact as the Poles grew in confidence, they seemed the team most likely to snatch the win. Blokhin and Oganesian both missed chances for the Soviets in the first half,  whilst Boniek and Smolarek came close to winning the game for Poland late in the game.

With Poland missing the talismanic Boniek, it was Italy who were odds-on favourites to reach the final. The Italians had been transformed by the return to form of Paolo Rossi, and the Juventus striker did not disappoint with two more goals. His first was a typical close range finish midway through the first half. Poland came close to equalising when Kupcewicz hit a post in the 35th minute. With temperatures in the high 30's, the game slowed to crawling pace, but a burst of action in the 72nd minute saw the Italians hit Poland on the break. Conti's perfect far-post cross was headed home by Rossi and Italy were heading to their fourth World Cup final.