It's that crazy time of year that you either love or hate. It's the play-offs and being Spain, the process of promotion is particularly convoluted. Many of you will be aware that the leagues below the top two divisions are regionalised. Segunda B, or the third tier is split into four groups of twenty teams, but with just four places available in La Segunda, a series of play-offs ensue.
The current structure sees the winners of each of the four groups play-off for two of the places in La Segunda. The winners of these two-legged ties win promotion, whilst the losers receive a second chance. Whilst the group winners are battling it out, the second, third & fourth teams in each of the four groups play two-legged ties on an inter-regional basis, so that this pool is reduced to six. These six teams are joined by the losers from the champions group and these eight teams play a straight two-legged knock-out competition until there are two teams remaining. These two teams win promotion to La Segunda. Phew! If it sounds complicated, don't worry, all will become clear as the play-offs progress. To start with, here is a look at the locations of the group winners 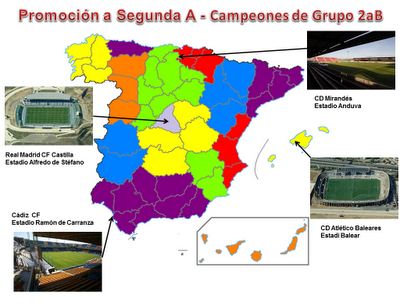 CD Mirandés will play Atlético Baleares & Cádiz CF take on Real Madrid CF Castilla on Sunday 20 May, then the return legs will take place over the weekend of 26/27 May. The winners of the ties will gain promotion to the second division, but will still play a two-legged final to determine the overall champion. The losers will head for the next phase of the play-offs. Now, because I'm nice, you can find detailed histories on each of the participants and their stadiums  by simply clicking on the text of the image below.


The first phase of the play-off's featuring the second, third & fourth placed clubs also commences on the weekend of 19/20 May. The teams that have qualified from Group I are CD Tenerife, CD Lugo & Albacete Balompie. Group II saw SD Ponferradina, SD Eibar & SD Amorebieta qualify, whilst Orihuela CF, Huracán Valencia CF & Badalona CF made it through from Group III. The final three that came through from Group IV are RB Linense, Lucena CF & Real Jaén CF. You can read detailed histories of the clubs and their stadiums by clicking on the name of the club. Here is the draw for this weekend's matches, with the return legs taking place a week later. 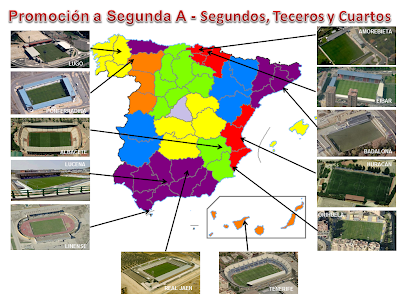